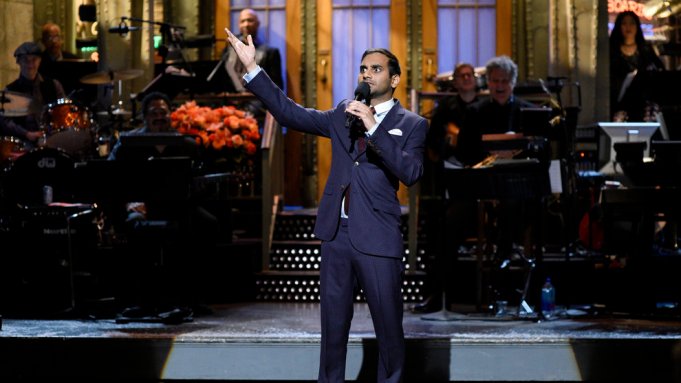 Comedian Aziz Ansari was given the plum gig of hosting “Saturday Night Live” the day after Donald Trump’s inauguration, and in his nearly nine-minute monologue, he squarely took aim at the new president.

The “Master of None” star then went on to talk about Trump voters, comparing them to people who listen to Chris Brown’s music.

“I’m sure there’s a lot of people voted for Trump the same way a lot of people listen to the music of Chris Brown,” he said, “where it’s like, ‘Hey, man! I’m just here for the tunes. I don’t know about that other stuff… I don’t condone the extracurriculars.’”

Joked Ansari: “If you think about it, Donald Trump is basically the Chris Brown of politics. And ‘Make America Great Again’ is his ‘These hoes ain’t loyal.'”

Trump’s election, he said, revealed a new group of voters who don’t have to pretend that they’re not racist anymore. “If you’re one of these people, please go back to pretending,” he said.

“I know it’s been a rough couple of years: Obama, ‘Empire,’ ‘Hamilton,’… ‘Star Wars’ movies where the only white characters are stormtroopers. I get it. It’s been rough.”

Ansari joked that the problem is these people just haven’t had enough interactions with brown people in their normal lives.

“The only people they see are these monsters in the news who are just a drop in the ocean,” he said. “Maybe what needs to happen is when they do the news report, they should do a second report about some other brown people that are just up to normal stuff… So the reports are like: ‘The suspects are considered armed and dangerous. Not armed and dangerous: these four other Muslim people that are eating nachos in Chicago. Let’s go to footage of them. Uh-oh, looks like Nasir just spilled a little cheese on his khakis!'”

He had a suggestion for the new president to unite the country: “Trump should make a speech: A real speech denouncing the lower-case K.K.K. Don’t tweet about me being lame or the show.”

Ansari pointed to George W. Bush’s post-9/11 speech: “It’s not about politics,” he said. “It’s about basic human decency and remembering why the country was founded in the first place.”

Ansari ended his monologue on a serious note. “If you’re excited about Trump, great,” he said. “If you’re scared about Trump and you’re very worried, you’re going to be OK, too. Because if you look at our country’s history, change doesn’t come from presidents. Change comes from large groups of angry people. And if day one is any indication, you are part of the largest group of angry people I have ever seen.”