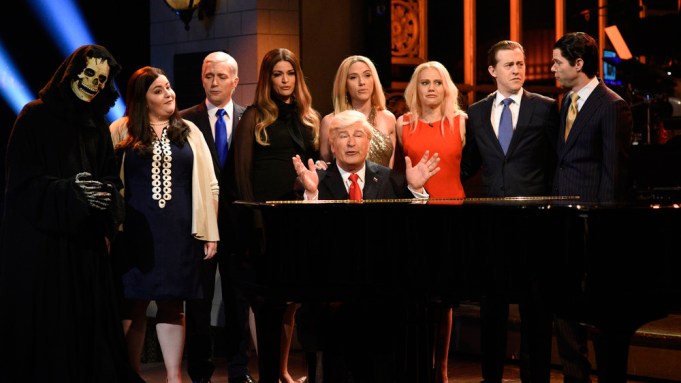 “Saturday Night Live’s” final episode of the season featured Alec Baldwin, Scarlett Johansson and “SNL” troupers assembling for another rendition of Leonard Cohen’s “Hallelujah,” but this time in the guise of Team Trump.

Baldwin was at the piano as President Trump. The song and the setting was a call back to the first “SNL” episode after the Nov. 8 election, when Kate McKinnon performed the song in the cold open to pay tribute to Cohen, who died Nov. 7 at the age of 82, and to acknowledge the nation’s shock at Donald Trump’s upset victory in the election over Democratic candidate Hillary Clinton.

After the song, Baldwin-as-Trump insisted: “I’m not giving up because I didn’t do anything wrong.” That was a reference to the rocky week for President Trump amid a series of explosive revelations, and to the comment McKinnon made after the song during the Nov. 12 episode. “I’m not giving up, and neither should you,” McKinnon said at the time, a nod to the pain that many women felt after Clinton’s loss and the dismay over Trump’s political agenda.

“Saturday Night Live” is wrapping its 42nd season with host Dwayne “The Rock” Johnson and Katy Perry as musical guest. It also marked the final appearances for both Bobby Moynihan and Vanessa Bayer. The two were featured in a number of sketches including “Weekend Update.”

During Johnson’s monologue, the actor noted the recent headlines about his speculative run for president. Baldwin rushed onto the stage, as himself, to urge Johnson to run. (He also welcomed Johnson into the club of people who have hosted “SNL” five times.) Johnson confirmed his intent to run, with a wink. He toyed with Baldwin about possibly being his running made before Tom Hanks (who is also in the five-timers club) bounded out on stage.

“A lot of people have told me that I should run for president,” said Johnson. “Starting tonight I’m running for president for the U.S.”

The two then launched into their campaign push: “Together we would get 100 percent of the vote. I would get the senior vote because I fought in World War II in like ten different movies,” said Hanks. Added Johnson, “And I would get the minority vote because everyone just assumes I’m what they are.”

The duo then turned semi-serious, ending their “campaign” saying “When it comes to politics, we need more poise and less noise,” as a big banner #JohnsonHanks2020 unfurled behind them.

By the end of the monologue, the hashtag #JohnsonHanks2020 was trending on Twitter.