‘SNL’: Alec Baldwin’s Donald Trump Declares ‘The War on Christmas Is Over’ (Watch) 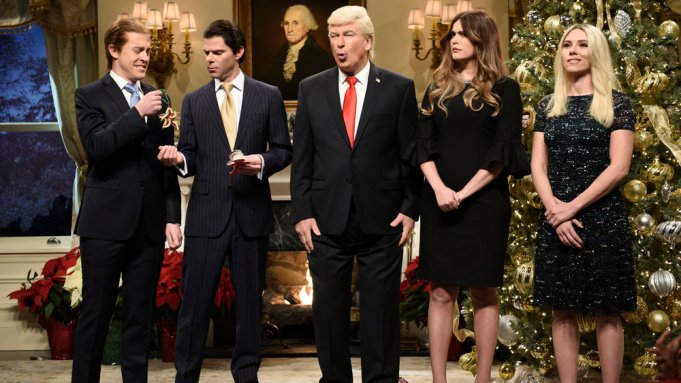 Alec Baldwin made yet another appearance as Donald Trump on “Saturday Night Live,” in the cold open which featured Trump decorating the White House for Christmas. With Cecily Strong’s Melania by his side, Baldwin-as-Trump welcomed staff and family to the Oval Office to hang ornaments on the tree.

“The war on Christmas is over,” said Baldwin’s Trump. “It will soon be replaced by the war with North Korea.” Baldwin’s Trump declared he’d had an “amazing year in office, the greatest year in the history of America — and maybe the entire planet earth.” To which Strong’s Melania said, “Rest in peace.”

“Just in time for Christmas, we’re about to give Americans the biggest, fattest tax cut they’ve ever seen,” added Baldwin’s Trump. “It might even make me a real billionaire. It’s my greatest achievement.”

The two then turned to trimming the tree, with Baldwin’s Trump saying, “In the Christmas spirit I wanted to thank all the amazing people who work for me, but because I can’t help myself I also want to remember all the haters and losers I destroyed this year.” His plan: hanging ornaments with their faces on the “tree of shame.”

First came Kellyanne Conway (Kate McKinnon), bearing an ornament with James Comey. “Sadly I had to fire him because he’s a nut job and he knows all my secrets,” said Trump, who then asked Conway what she wants for Christmas. “I want out,” she said.

Then arrived Sarah Huckabee Sanders (Aidy Bryant), with ornaments with Sean Spicer and Anthony Scaramucci — “Whose mangled corpses I stepped over to get this job,” she added.

Beck Bennett’s Mike Pence — “my fall guy,” said Trump — brought a Mike Flynn ornament, “because he lied to us,” explained Pence. “He acted alone, without our knowledge,” he added.

Then Omarosa (Leslie Jones) started banging on the window, demanding to be let in, before she was hauled away by Secret Service. “Nobody kicks Omarosa out of the White House,” she insisted.

Then it was the family’s turn: Scarlett Johansson made a return appearance as Ivanka — minus Jared (“He’s packing a go bag before the FBI arrives,” she explained). Her ornament of choice was Roy Moore. Cracked Ivanka, “There’s a special place in hell and we’re all there.”

The sketch ended with one more appearance by Omarosa. “Take me back!” she pleaded.

The episode was hosted by Kevin Hart, back for his third time emceeing the show. In his monologue, he riffed on fatherhood — he just became a father for the third time. “I can admit to everybody that I wasn’t excited about having a baby in the beginning,” he said. “I didn’t want to deal with that two-year-old age again. All you do is repeat yourself.”

Hart, who’s currently starring in the movie “Jumanji: Welcome to the Jungle,” was joined by musical guest The Foo Fighters.