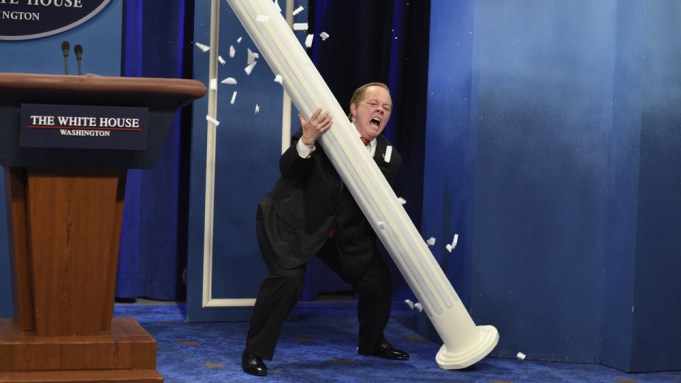 The opening sketch lobbed several zingers at Trump, including a risque reference to Trump’s claim to have coined the phrase “priming the pump.” Baldwin’s Trump insisted that it was a description of his need to “tug at myself for about a half an hour before Melania comes in so she can find it easier.”

The cold open incorporated numerous headlines from another eventful week for the Trump administration, from the firing of FBI director James Comey to the revelation that the President likes two scoops of ice cream for dessert. Mikey Day made an appearance as an over-eager House Speaker Paul Ryan delivering ice cream to Trump.

Among Baldwin’s best lines from the sketch:

Later in the show, McCarthy made a triumphant return as Spicer in a long sketch that had him battling for his job after Sarah Huckabee Sanders began filling in this week.

The segment began with McCarthy-as-Spicer hiding in the bushes outside the window, with Sanders (Aidy Bryant) filling in at the podium, and the press corps begging her to stay on. “Can’t you just do this full-time instead of him?” they pleaded.

But McCarthy’s Spicer returned to the lectern, armed with a fire extinguisher to put “his pants out” for lying. “Spicey’s back, Sarah’s out,” announced McCarthy as he sprayed the extinguisher’s white foam at reporters.

Asked about Trump’s connections to Russia, McCarthy-as-Spicer responded: “Let me just  put this whole Russia thing to bed. Trump is innocent. How do we know? Because he told us so. They’re going to prove it with a certified letter.”

McCarthy then read off the tracking numbers — only then to realize it was his own bank routing number. “No one use it,” McCarthy declared.

McCarthy then brought a set of Russian nesting dolls to illustrate the relationship between Trump and Comey, ultimately explaining that Comey’s firing was due to “Trump’s good friend” Jeff Sessions, illustrated by Pikachu.

When asked: “Were you surprised Trump fired James Comey instead of you,” McCarthy-as-Spicer ripped a pillar off the wall and threw into the press corps. “I hope to god it killed her.”

Pressed on if Trump is lying to him, Spicer insists “he wouldn’t do that, he’s my friend.” Spicer then left the press briefing room on his motorized podium, driving through the streets of Manhattan in search of Trump. “I promise I’ll talk better,” he yelled while rolling down 58th Street.

Spicer arrived at Trump Tower, only to be told by the doormen that Trump doesn’t come there anymore. He finally finds Baldwin-as-Trump at a golf course in New York, and asks the burning question: “Have you ever told me to say things that aren’t true?” Replies Trump, “Only since you started working here.”

Trump reassures Spicer that he won’t replace him with Sanders (“She doesn’t have your special spice”). The two exchanged a passionate embrace to close out the sketch.