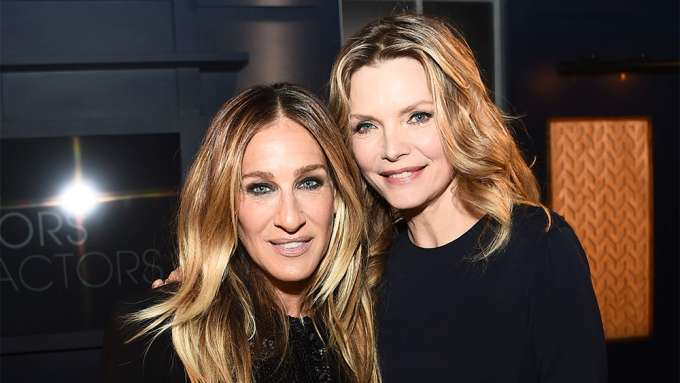 Sarah Jessica Parker and Michelle Pfeiffer sat down for an interview for Variety’s “Actors on Actors.” For more, click here.

Sarah Jessica Parker: It’s such an interesting idea to take on a part that people think they know. What I learned about Ruth Madoff was everybody thought they knew her. It’s another complexity to playing a real person and must have been wonderfully challenging.

Michelle Pfeiffer: It was really daunting, honestly. It wasn’t until I committed to it that it occurred to me that I was playing a real person, and it was the first time that I had ever done that. And somebody who had already been through so much tragedy and was somewhere in the world, trying to heal. I knew this was probably the last thing in the world she would want. Of course I thought, “Can I get out of this?” I felt horrible, and I couldn’t because I’d made the commitment.

Parker: So when you are playing a character as unique as Ruth Madoff, who is alive, how do you approach it? I would assume your immediate intention was she was a human being who … was or was not complicit in this unthinkable thing that her husband did. Were you wanting her to be as human for us? Did it matter to you? Were you trying to defend her?

Pfeiffer: It’s interesting that you say “was not complicit.” I think that the consensus is that she was. I think that at the end of the day, I hoped I could represent her story as honestly as possible. Look, it’s not the Ruth Madoff story, so there’s a limited amount of time.

Pfeiffer: They were very bonded. He was her first and only love. And he was, as she says, her life. It was him and those two boys. … What about you? After all of these years, deciding to come back and do a television series, which can be really grueling. What’s it like now? I actually did a television series; I did two when I first started out. I just remember never working harder in my life. And you have two young children.

Parker: Three! One is not as young as I wish sometimes. I have a 14-year-old and twin daughters who are 7.

Pfeiffer: I’ve watched [“Divorce”], and I love this sort of dark comedy, but it does have comedic elements to it. And it’s very sad to watch this marriage unravel. So what was it about this that made you want to come back to television?

Parker: When I finished “Sex and the City” and then the movies, I assumed I wouldn’t do television for a while, because of how you characterized it. And I really love the medium. … I like the idea of living an alternate life to your own and telling a complete story about somebody. I love that television demands a sort of discipline. When you’re producing, and I’m sort of bundling producing in with the acting — because for me that is a part of the enormous joy and challenge and tears — I love how specific you have to be about every decision and how it all adds up so quickly.

Pfeiffer: You were just developing [“Divorce”] as a producer.

Parker: I had all these other people in mind that I wanted to play the part. But then when it was presented, I was like yeah, I love this woman. She’s so unfamiliar. And I was so excited. I got the blessings of my family and my husband and I knew what it would require. Being able to shoot in New York allows me to get to make a choice, period. … For you, what is the balance? How do you know what you want versus what your children need?

Pfeiffer: There are no hard-and-fast rules, and really with anything in our business, which is one of the challenges, you kind of make it up as you go along. The rules sort of develop as they age, and it changes. When they were little, I could just take them anywhere, and then once they started school I felt like I didn’t want to take them out of school during the school year, and so I had these rules that I guess I’ll only go away for a certain amount of time. And before I knew it, I was impossible to hire because I just had all of these demands, and not that I meant to be demanding, but I was trying to keep a foot in each world. It becomes harder the older they get. You’d think it would become easier, but things come up in their lives.

Parker: They need you.

Pfeiffer: You just want to be there. And so I think having children and doing television is really a wonderful option. Television has changed so much, even in the last 10 years, especially for women. It’s such an amazing place.

Parker: Television is doing better by some of those areas that were, I think, legitimately criticized for lack of diversity and gender. And television seems to — not by force, but really naturally — come to female directors and writers more.

Pfeiffer: I would love to do something in television. Because at this stage in my life it actually fits really well, because I like the idea of just being in one place for a while. … I think there is a range of possibilities in television.

Parker: That means that thus far, nothing’s come across that allows for you to go, “Ah yes!” Right?

Parker: This is my scoop! I feel like Rona Barrett.

Pfeiffer: I was thinking you should have your own talk show.

The interview will air in its entirety on Variety‘s “Actors on Actors” Season 6, presented by Shutterstock, which premieres June 13 on PBS SoCal. You can also watch the full interview above.