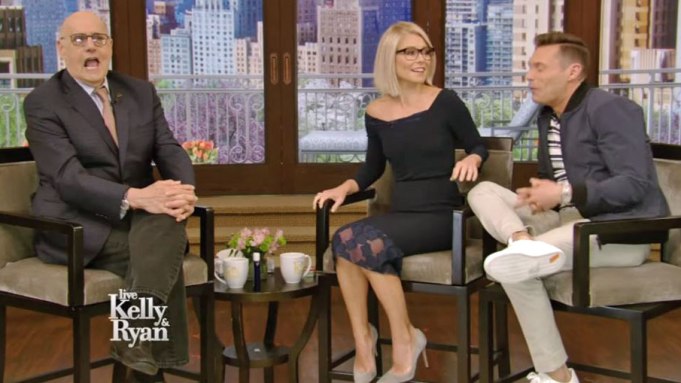 Ryan Seacrest had an awkward moment with actor Jeffrey Tambor on “Live with Kelly and Ryan” Wednesday when he mistook Tambor for the late “Ghost” actor Vincent Schiavelli.

Seacrest referred to Tambor’s roles on “The Larry Sanders Show,” “Arrested Development,” and “Transparent” as “unforgettable” while introducing his guest to the audience, and then went on to recount his fond memory of watching Tambor in “Ghost” as a child. Tambor, however, never appeared in the film.

“We talked about the things you have done and are doing, but to me, you’re the scary guy on the subway in ‘Ghost,'” Seacrest admitted.

Tambor took the error in stride and drew out his reaction for comedic effect.

“Oh, this is horrible,” he said in his signature bass. “You’re gonna be embarrassed. That’s not me. He’s dead.”

Seacrest and co-host Kelly Ripa tried to play along with the mistake, with Seacrest pretending to get angry that his notes hadn’t been corrected and Ripa feebly interjecting that at least Tambor was still here.

An image of Schiavelli came up on screen for comparison, to which Tambor pretended to take offense.

“I am hurt. My reps are here and we are filing an action suit,” Tambor said mock indignantly. “I came on in good faith.”

The audience laughed along with Ripa and Seacrest as Tambor admitted that he had been mistaken for the actor previously when a waiter in Rome approached him, threw down a napkin, and said “Get off my train!” — a line from “Ghost.” He went on to joke that his wife even thought he was Schiavelli, and they had gotten married anyway.

Tambor visited the show to promote his new memoir “Are You Anybody?” available in stores now.

Watch the clip here or above.