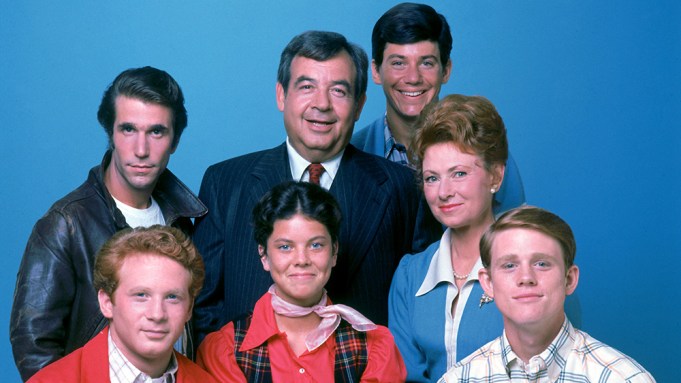 While visiting “The Talk” on Monday, director Ron Howard spoke about his “Happy Days” co-star Erin Moran, who died on Saturday at the age of 56.

“What a great, irrepressible spirit, you know, and a wonderful talent, and you know she was always the kid on the set,” he said.

He went on to share a memory of Moran on the set of “Happy Days,” which he called a kind of “boys club.”

“I do remember a particular moment where we were in rehearsal… and somehow it was kinda turning into a shaving cream fight, and she did sneak up behind Henry Winkler with a pretty good shaving cream pie and get him,” he remembered.

Moran played Joanie Cunningham, Howard’s younger sister, on the 1970s sitcom. Her body was found unresponsive by authorities in Indiana, with the coroner citing stage-four cancer as the cause of death.

Moran continued her role as Joanie in a spin-off show, “Joanie Loves Chachi” with co-star Scott Baio. Baio recently commented on the news in a radio interview, referring to her as “troubled” and stating that her history of drug and alcohol use may have had a hand in her death.

Howard also alluded to her troubled past on “The Talk,” saying that he chooses to remember her as the “feisty, spirited girl” he knew on set.

The “Beautiful Mind” director also tweeted a message of remembrance earlier this week.

Such sad sad news. RIP Erin. I'll always choose to remember you on our show making scenes better, getting laughs and lighting up tv screens. https://t.co/8HmdL0JKlf

Howard visited “The Talk” to promote upcoming National Geographic series “Genius,” of which he directed one episode. “Genius” is NatGeo’s first ever scripted series and stars Geoffrey Rush as Albert Einstein. It premieres April 25 on NatGeo.

Watch the clip from “The Talk” above.