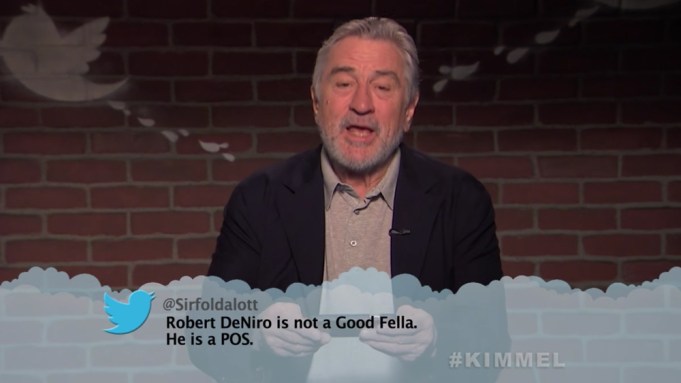 Monday’s episode of “Jimmy Kimmel Live” may have been all about the Oscars flub heard round the world, but it also made time for a segment that keeps on giving.

After being featured in the Oscars edition of “Mean Tweets,” Robert De Niro got a version of the segment all to himself — an honor that has only been bestowed to former President Barack Obama. The “Taxi Driver” star didn’t just brush off the insults though, but bit back.

His other NSFW reactions ranged from a simple “F— you,” to “Who are you? Are you some little f—in’ 15-year-old with nothing better to do in your life?”

The De Niro edition of “Mean Tweets” follows the Academy Awards segment that aired during Sunday’s ABC telecast. Stars, including Ryan Gosling, Emma Stone, Natalie Portman, and Samuel L. Jackson, were filmed beforehand reading the colorful insults. Each celebrity’s best soundbite was then picked for the segment. But De Niro’s tweets and responses begged for a compilation, according to the description on the “Jimmy Kimmel Live” YouTube page.