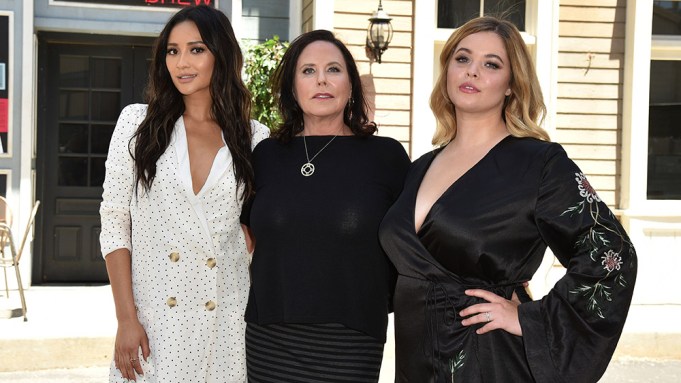 Have you ever wondered what it’s really like in Rosewood? Well then, you’re in luck.

To celebrate the series finale of “Pretty Little Liars,” creator Marlene King takes us on a behind-the-scenes tour of the set where “PLL” has filmed for the past seven years since it premiered back in June 2010.

“Pretty Little Liars” was filmed on the Warner Bros. backlot located in Southern California, where other popular TV series like “The Big Bang Theory,” “The Ellen DeGeneres Show,” “Conan,” “Gilmore Girls,” “ER,” and “Friends” all call home. Fun fact: King’s newest show, Freeform’s “Famous in Love” with Bella Thorne, also tapes at the Warner Bros. lot on one of the sound-stages — Stage 8 — that was vacated by “Liars” when the show wrapped. “PLL” shot on Stages 6, 7, and 8.

In this behind-the-scenes video, exclusively released to Variety from Freeform, King drives around in her golf cart, aptly named the “Pretty Little Mar Cart,” to ride past famous “PLL” sets such as Rosewood High, Rosewood City Hall, the Lost Woods Resort, and all of the liars’ homes. Though Aria, Hanna, Spencer, Emily, Alison, and Mona aren’t neighbors on the show, on the lot, all of the liars’ houses are located next door to each other — TV magic! (Toby’s house used to be located right next to Mona’s home, but that was before it was blown up. Remember that?)

King also reminisces on one of her favorite locations: kissing rock, where Emily (Shay Mitchell) and Ali (Sasha Pieterse) smooched seasons back. “Don’t tell anyone, but when the show wraps, I’m going to steal this rock and make it into a coffee table in my office,” King reveals. The show creator also says she’s going to take the DiLaurentis’ mailbox from the set. The tour also goes into Spencer’s bedroom where King quips, “She’s had sexy time in here with a few people.”

Also on set is Ezra’s classroom, the Radley Hotel, and the Rosewood Church. “I’ll give you a spoiler alert,” King says while standing inside the church. “My cameo will be in the scene that shoots in here for the finale.”