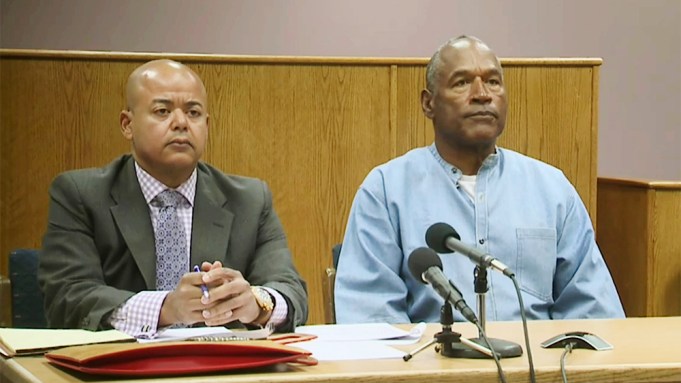 All eyes are once again on O.J. Simpson.

The 70-year-old former football player’s parole hearing is currently underway. It was expected to run anywhere from 15-20 minutes, but clocked in at over an hour.

Simpson has served over eight years of a 9-33-year sentence in a Nevada prison after being convicted of armed robbery and assault following a 2007 Las Vegas incident. If granted parole, he could be out as early as this October.

ABC, NBC, CNN, Fox News, MSNBC, HLN, and ESPN are all airing the parole hearing in full. CBS will preempt their daytime coverage to air a portion of the hearing, but will stream the complete meeting online.

Exactly 13 years prior to his sports memorabilia conviction, Simpson was infamously acquitted of the murders of his ex-wife Nicole Brown and her friend Ronald Goldman. Following the 1995 trial, a civil jury found Simpson responsible for both deaths, awarding the Brown and Goldman families compensatory and punitive damages totaling $33.5 million.

Simpson and his attorney Malcolm LaVergne presented their case in front of a 4-person panel representing the Nevada Board of Parole on Thursday.

Watch NBC’s live stream for the hearing above.