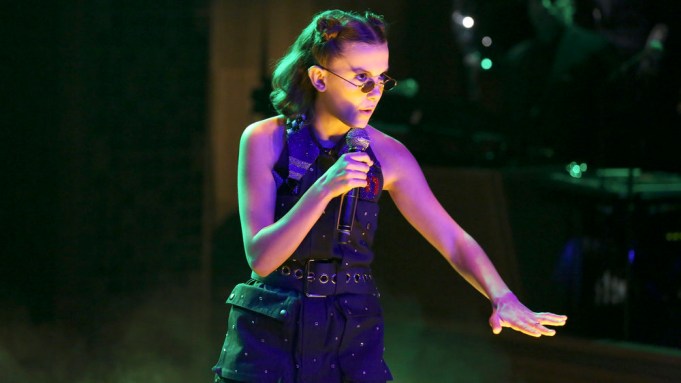 Millie Bobby Brown‘s character Eleven on “Stranger Things” might have a limited vocabulary, but the young actress has no problem dropping bars on television.

Brown appeared on “The Tonight Show Starring Jimmy Fallon” Tuesday to promote the second season of Netflix’s hit show. With Fallon serving as her hype man, Brown agreed to rap a recap of the first season so that “people can watch Season 2 and know what they’re talking about,” Brown explained.

“Let’s go back to Indiana, circa 1983/ Just four boys in the basement chillin’ playin’ D&D,” she begins before breaking down key plot points including the origin of her character and the lack of justice for fan-favorite Barb.

Brown also summarized the Season 1 finale, which left her character’s fate in question. “Demogorgon’s getting’ all in my way/ Blast him to pieces just like a grenade/ Will’s now at home coughin’ slugs in the sink/ What happened to me? I’m in the Upside Down.”

Watch her performance here or above.