Michael Fassbender Does the Worm on ‘The Graham Norton Show’ 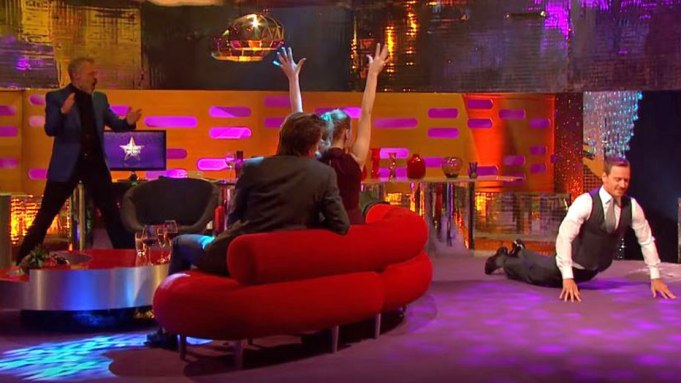 Talk shows often give stars the opportunity to show off their non-acting talents. On Thursday’s episode of “The Graham Norton Show,” Michael Fassbender showed off his breakdancing skills.

The “Alien: Covenant” star, after much cajoling from co-guest Jessica Chastain and the audience, removed his mic and suit jacket as Norton had the emcee turn on some Gary Newman and colorful disco lights. Fassbender then proceeded to catch some air with an impressive “flip swan dive” onto the ground, where he went straight into a fairly well-coordinated rendition of the worm.

The dance came after Norton brought up Fassbender’s apparent desire that his “Prometheus” and “Alien: Covenant” character David, a synthetic android, enact a “Napoleon Dynamite”-esque dance routine at the end of the film as the credits rolled. Chastain feigned ignorance over what breakdancing was and requested that Fassbender perform some to enlighten her. The audience egged him on with cheers and applause.

Diane Keaton and Chastain gave him a standing ovation, while Kevin Bacon applauded politely, probably reminiscing on his dancing in “Footloose” and thanking the powers that be that he wasn’t being asked to recreate any of those scenes.

You can catch Fassbender in “Alien: Covenant” when it opens May 19.

Watch the impressive video here or above.