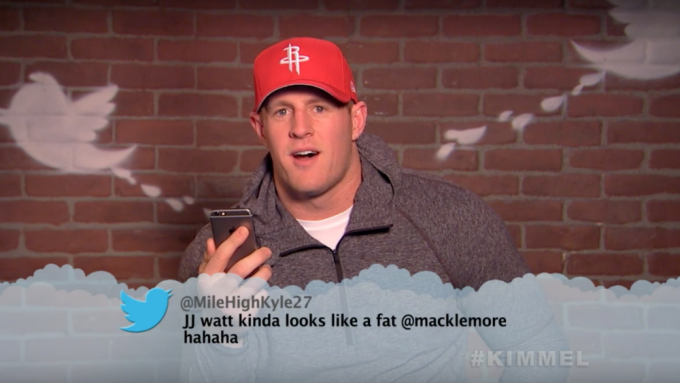 Whether a politician, a movie star, or an athlete, Jimmy Kimmel never lets us forget that everyone gets flak on Twitter. In honor of this Sunday’s Super Bowl festivities, Kimmel rounded up some of the NFL’s shining stars for a second round of “Mean Tweets — NFL Edition,” where he seats players one by one, and has each read out some of the harshest tweets aimed at him.

On Thursday night’s round of “Mean Tweets,” Kimmel’s readers included Tony Romo, Odell Beckham Jr., Russell Wilson, and Rob Gronkowski. While many of their facial expressions were enough of a response to the Twitter roasts, some of the players were prepared with a rebuttal.

“Tony Romo sits down to pee,” Romo reads from a phone. “Well, what other way is there to pee?” he responds.

Chargers defensive end Joey Bosa read out a jab that hit home, in which a Twitter user targeted Bosa’s parents for denying him a chance to live out his true dream. “Joey Bosa looks like a dude who wanted to be a magician, but his parents made him focus on football,” the user posted.