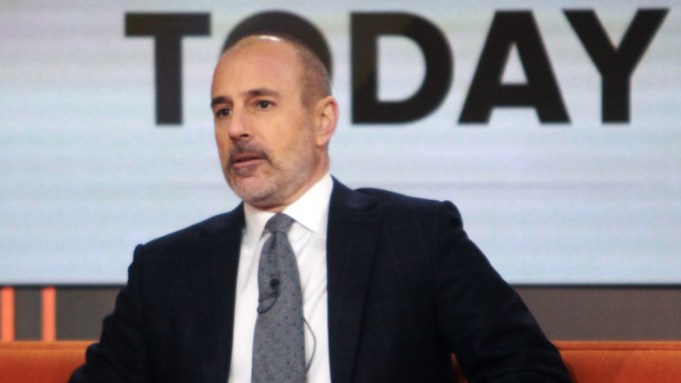 The morning after a new Matt Lauer victim stepped forward, sharing her account with Variety, “Today” brought on the attorney who has been representing the original woman who accused Lauer of sexual harassment, which led to his ouster. During the Friday morning interview, the woman’s lawyer slammed NBC for its handling of his client’s story.

“NBC has a duty to maintain confidentiality — that means to maintain secrecy over her name, and to hold to themselves the details of their story, and they have not done a good job of doing that,” said civil rights and employment attorney Ari Wilkenfeld, who sat down with reporter Stephanie Gosk, who has been investigating Lauer’s scandal for NBC News.

“They know exactly what they’ve done and they need to stop,” Wilkenfeld warned of NBC.

Wilkenfeld, a founding partner at the firm Wilkenfeld, Herendeen & Atkinson in Washington, has been representing the female NBC employee who filed a confidential complaint to the company’s human resources department regarding inappropriate sexual conduct from Lauer that started at the Sochi Olympics in 2014. Nearly 24 hours after her meeting with HR, Lauer was fired for cause.

In response to Wilkenfeld’s claims that NBC has failed to protect his client’s confidentiality, a spokesperson for NBC News provided a statement for Gosk’s report. “The network has protected the employee’s anonymity all along and will continue to do so,” the statement read.

The segment shined a critical light on NBC, putting the network in a tough spot by airing the sit-down with Wilkenfeld. As continuous sexual harassment scandals have been rocking the media, news organizations have been tasked with the tricky assignment of covering their network’s own news — from “CBS This Morning” covering Charlie Rose’s exit to “Today” covering Lauer’s swift departure.

“She showed her face, she gave her name, she told her story, and at the conclusion of the interview, she was asked, ‘What do you want?’ And she said, ‘I want you guys to do the right thing, and I’d like you to maintain my confidentiality,'” Wilkenfeld shared of his client’s HR meeting with NBC. Though the attorney says NBC has fallen short of protecting his client’s name and story, he did not reveal exactly how the network’s actions have disappointed him and his client.

“My client is terrified, and she does live in constant fear that people are going to track her down and figure out who she is, and she feels badly for the many other women who are suspected of being her and who are also being hounded and harassed,” the attorney said during his “Today” interview. “There is a hunt underway to figure out who she is and I think that’s going to have a chilling effect on other women who might want to come forward and tell their stories,” added Wilkenfeld, who also penned a Washington Post op-ed this morning about how men can help stop sexual harassment in the workplace.

As part of Gosk’s piece, NBC News also covered the latest Lauer accuser, Addie Zinone, who shared her story with Variety, becoming the first woman to go on the record against Lauer.