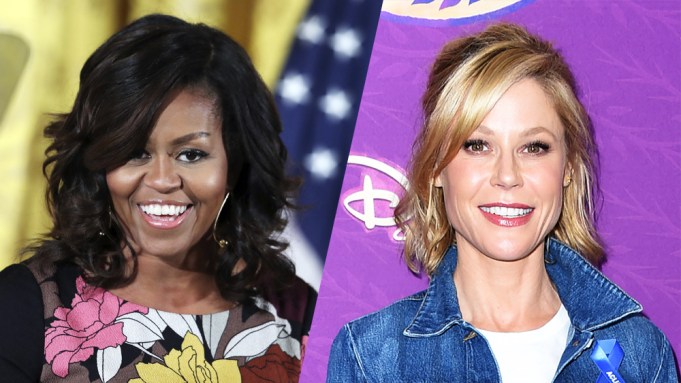 Thursday night’s episode of “MasterChef Junior” brings the Former First Lady and “Modern Family” mom onto the screen to share messages of healthy eating and bring an inexperienced perspective to the kids’ kitchen.

“Julie would be the first to admit she’s not the greatest chef in America,” Ashbrook laughed.

“She shares many of the same ambitions that ‘MasterChef’ does in terms of how kids and families approach food,” he added, comparing Obama’s “Let’s Move!” mission to the goals of the Fox series.

Ashbrook explained how important it is to his team to help parents and kids see the value in having a positive relationship with food, saying, “Good, clean, healthy foods prepared in the right way is not an unknown science that is only achieved by great chefs. It’s something that every family and child should do, understand, and have respect for.”

Ashbrook continued, “We are the biggest cooking show in America, for which we’re very grateful and for the First Lady to get that message across, we were absolutely the natural place to do that.”

The show worked collaboratively with Obama to stress the importance of a healthy diet, ending up with Obama recording segments screened to the kids during the show’s taping and “a pretty hefty prize.”

“Not only did she give the time to work on the ingredients within the mystery box, but furthermore, the prize for winning this mystery box was actually to go and spend time at the White House directly with Michelle Obama,” Ashbrook  said. “She was fully invested in this as much as we were.”

For Bowen’s challenge, the kids were asked to make a meal in honor of their mothers. She came on set to watch the action and encourage the contestants to recognize the value in having a parent who advocates for a healthy diet.

Ashbrook added that Bowen was one of his all-time favorite guests, as she’s not a career foodie. Her fresh perspective allowed her to be genuinely excited when she saw what the kids cooked up and witnessed their knowledge of technique and food science.

“To put two of America’s most noted, recognizable, and celebrated moms in the same episode, I wouldn’t be doing my job if I didn’t seize upon that,” Ashbrook said. “Memories of family moments put together in the kitchen and at the dinner table, it made sense for us to wrap it all up in one show.”