Mary J. Blige on How Her ‘Mudbound’ Director Helped Her Embrace Her Beauty 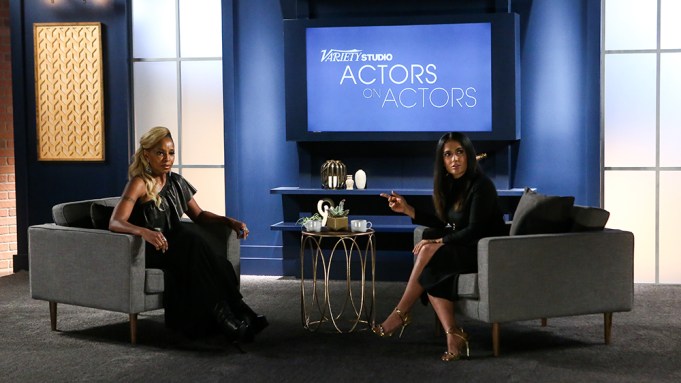 Variety and PBS SoCal KOCE’s Emmy Award-winning show “Variety Studio: Actors on Actors,” presented by Google Home, is approaching its seventh season, bringing together some of the biggest stars for conversations about their perspectives on their latest works.

Actresses Mary J. Blige and Salma Hayek, who star in “Mudbound” and “Beatriz at Dinner” respectively, sat together at the studio and discussed how their latest movies influenced their perceptions of body image.

Blige said that the role of Florence in “Mudbound” came to her at a point of insecurity and low self-esteem, which caused her to initially resist when director Dee Rees called for her to strip off her makeup and other beauty accessories for the role. However, Blige eventually decided trust Rees and found that the experience allowed her to let go of her preoccupations and embrace her inner beauty, and that the sense of surrender was therapeutic.

“I didn’t really realize that I was hanging onto so many things of the world that made me feel beautiful. I was fighting for fingernails, and fighting for wigs and things like that. And I just didn’t wanna strip down, because I just was afraid,” Blige said. “Once I trusted [Rees] and let Florence live, she really liberated me. She really opened me up to my own inner beauty for real. Not what I thought I’d learn, but really truly who I am. And that none of this matters, you know?”

Hayek, however, had quite the opposite experience. The actress noted that her character did not put on makeup and wore an unflattering wig, and though director Miguel Arteta thought he would have to push her to transform for the role, she was excited to change her appearance.

“I was so excited not to look good. Because for me, it was liberating not to have to look good,” she said. “This woman has nothing to do with the way she looks. And I just loved it. I just felt really comfortable and happy to not have this burden that most women have to have, of having to look good.”

Hayek said that the role helped her realize that she did not have to try to be beautiful for anyone but herself, and Blige added that her experience playing Florence helped her accept the little details about herself, like the texture of her hair. Hayek summed up both of their experiences with some words of encouragement, saying that “there’s nothing sexier in this world than talent. And that can last forever.”

The seventh season of Variety‘s “Actors on Actors” will air from Jan. 2 to Jan. 4 at 7 p.m. on PBS SoCal KOCE.