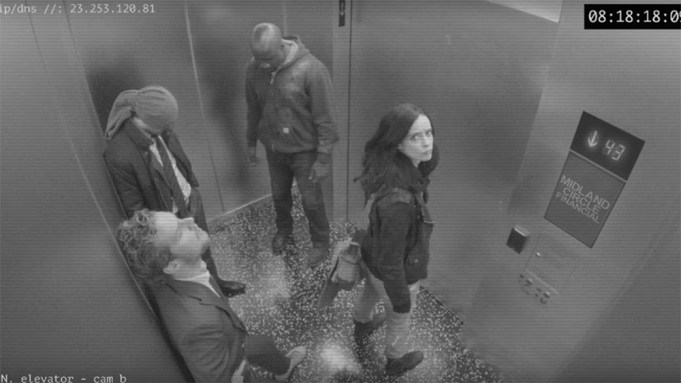 On Tuesday, Netflix and Marvel revealed the premiere date, in the form of a brief teaser trailer, for its upcoming series “Marvel’s The Defenders.”

The trailer, titled “Midland Circle Security Elevator B,” shows the four heroes entering an elevator on a grainy, black and white security cam. The video reveals the premiere date of the series in the time stamp on the upper right-hand corner of the video, which stops at “8:18:20:17,” or Aug. 18, 2017.

Each superhero — played by Mike Colter, Finn Jones, Krysten Ritter, and Charlie Cox, respectively — has been featured in solo Netflix series leading up to their eventual unification as The Defenders.

In another Easter egg, the upper left-hand corner reads “ip/dns //: 23.253.120.81″ — an IP address that, typed as a URL ” http:// 23.253.120.81,” leads to a New York Bulletin Archive website, a fictional paper featured in “Marvel’s Daredevil.” The website features imaginary covers for articles about each of the four superheroes, as well as a video interview with “Iron Fist” characters Joy and Ward Meachum. One of the covers features the headline “Midland Circle Rises to New Heights,” suggesting that the building in the teaser will play a role in the upcoming series.