Continue to Variety SKIP AD
You will be redirected back to your article in seconds
Feb 7, 2017 10:40am PT 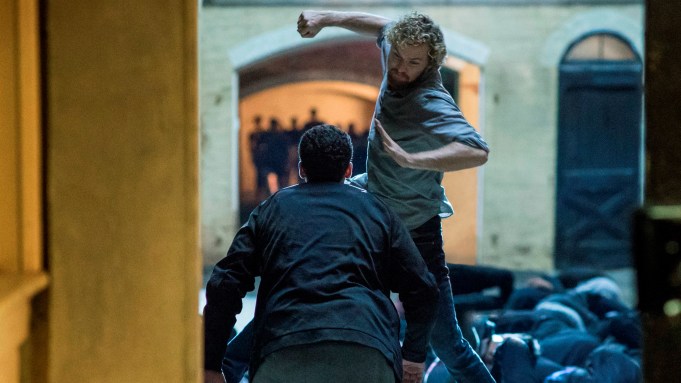 “Hi. I’m Danny Rand. I’ve been away a long time,” begins the first official trailer for Netflix’s newest Marvel series. Barefoot and clad in a tattered, dirty sweatshirt, “Iron Fist” (played by Finn Jones) walks into his parents’ company headquarters, 15 years after disappearing in a plane crash that killed his mom and dad, and left him presumed dead.

Netflix and Marvel released the trailer on Tuesday, following the release of a teaser at last year’s New York Comic Con. The new footage reveals “Game of Thrones” alum Jones as the martial artist and superhero who returns home to fight “some bad people [who] have gotten on the inside,” after training in the mysterious K’un L’un, where he seems to have developed a glowing fist with the power of a hundred jackhammers. Though he’s beholden to his family’s legacy, when a new threat emerges, he has to choose between his past and the responsibility of the Iron Fist.

The new superhero series also stars Jessica Henwick as Colleen Wing, David Wenham as Harold Meachum, Jessica Stroup as Joy Meachum, and Tom Pelphrey as Ward Meachum. Carrie-Anne Moss and Rosario Dawson reprise their roles from past Marvel shows, as well. In the trailer, Dawson’s Claire Temple appears and calls upon a hero with “special skills” to help fight their enemies; this time, that hero is the Iron Fist.

“Iron Fist” is the fourth Netflix series from Marvel, following “Jessica Jones,” “Daredevil,” and last year’s “Luke Cage.” Jones will also be reprising his role in an upcoming fifth series, “The Defenders,” which will unite the Marvel television universe’s characters. In addition, Netflix has ordered spinoff series “Marvel’s The Punisher,” with Jon Bernthal as the vigilante soldier Frank Castle, who first appeared in “Daredevil” Season 2.

All 13 episodes of martial-arts action series “Iron Fist” will premiere on March 17 on Netflix.