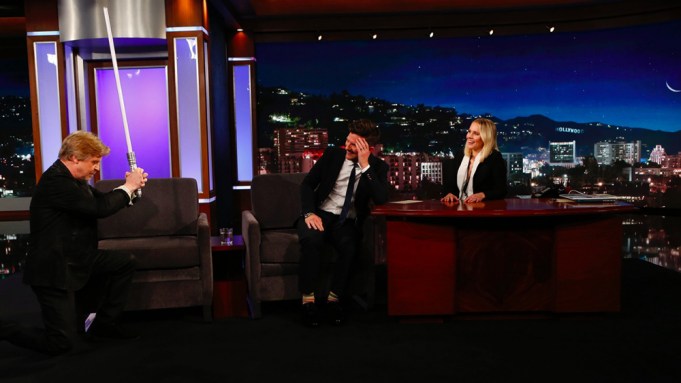 After searching for the force for more than 40 years, Adam Scott finally found it on “Jimmy Kimmel Live!”

During Thursday night’s episode of “Kimmel,” which landed on national Star Wars Day, Scott explained to guest host Kristen Bell that he once wrote a letter to Mark Hamill inviting him to his second birthday party, confident that the “Star Wars” actor would show up.

“I thought if he got it and he was able to — if his schedule was clear, he was probably going to come,” the “Parks and Recreation” alum said.

Much to his sorrow, Hamill didn’t make it out that day.

“He didn’t show up and I remember not being crushed or anything,” Scott said. “It was fine. I knew he must’ve been incredibly busy.”

Mid-story, the iconic “Star Wars” theme song blasted, and Hamill emerged from backstage with a lightsaber in hand.

The “Big Little Lies” star did not hide his surprise — with his hands shaking and a colossal grin on his face, he shouted, “no f—ing way.” After Hamill bestowed Scott his lightsaber, he explained the reason for his unfortunate absence at the party.

“I’m sorry I missed your birthday,” he said. “I was checking my diary and that week I had two other birthdays, a Bar Mitzvah, and a supermarket opening.”

Scott was understanding, to say the least.

“This really is one of the best moments of my life,” he declared.