‘Legends of Tomorrow’ Exclusive Clip: The Legends Get Stranded 70 Million Years in the Past 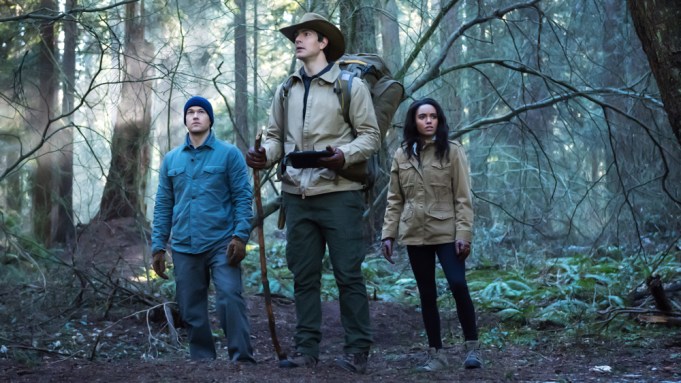 In this week’s episode of “Legends of Tomorrow,” the team find themselves stranded 70 million years in the past after the recently captured Rip Hunter (Arthur Darvill) sabotages the Waverider.

In order to repair the ship, Ray (Brandon Routh), Amaya (Maisie Richardson-Sellers), and Nate (Nick Zano) head out into the wild to look for a vital piece of the Waverider. Having spent six months stranded in this time period at the beginning of the season, Ray takes charge of the search.

In the clip, the three have just survived an encounter with a rather territorial dinosaur.

“Well, it just so happens that lady dinosaurs are fairly maternal,” Ray reveals when asked why the three were attacked by the dinosaur. “And I may have eaten one of her eggs. I was starving, I needed protein! One egg made me like 70 omelettes.”

Eventually, the three make it to the shelter that Ray lived in while he was stranded in the past. Amaya comments on the smell, and Ray explains that he doused the area in male T-Rex urine. Nate notices some handmade figures with familiar likenesses.

“Do I want to know what these are?” he asks.

“That one looks just like Captain Lance,” Amaya says.

“I might have gotten a little lonely,” Ray says with a shrug.

The “Legends of Tomorrow” trip 70 million years into the past — titled “Land of the Lost” — airs Tuesday at 8 p.m. on the CW.