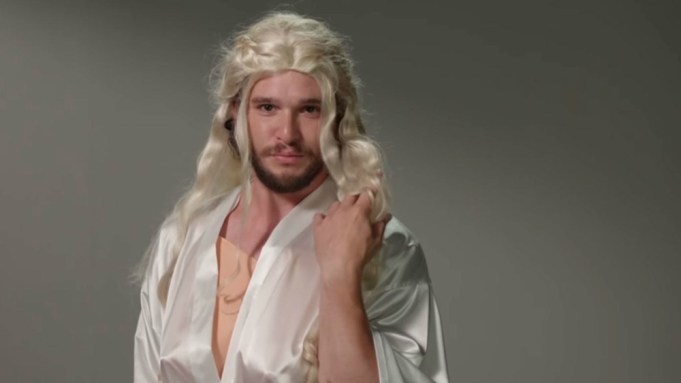 Donning an elaborate wig and red cape, and nursing a goblet of wine, Harington auditioned for the role of Cersei Lannister. “When you play the game of thrones, you win or you die. Now, if you’ll excuse me, I need to have sex with my brother,” he said.

He also screen-tested for the roles of Arya Stark, Daenerys Targaryen, Ygritte, Hodor, and a White Walker while wearing various low-budget costumes, including a Little Mermaid-style wig and child’s toy bow and arrow for Ygritte, and shaving cream and aluminum foil armor for the White Walker. Particularly wince-worthy was the breast plate — and not of the armor variety — Harington revealed while testing for Daenerys.

“Well hello, Khal Drogo,” Harington said into the camera. “Would you like to see my dragons?”

The pièce de résistance came when Harington attempted to insert a certain beloved British wizard into the “Game of Thrones” storyline, and, when that failed to impress, whipped his robes off to reveal the same breast plate he had used to emulate Daenerys.

“Game of Thrones” returns to HBO on Sunday.