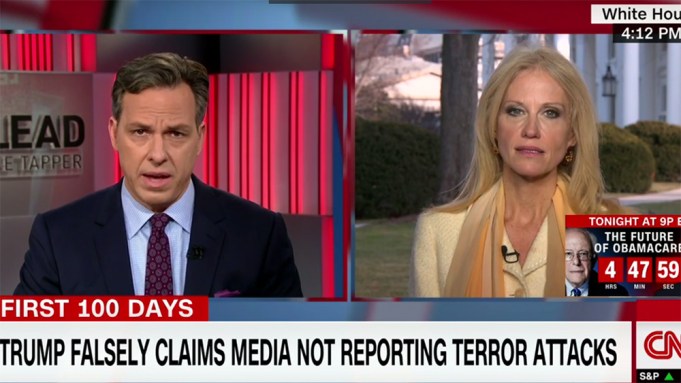 Kellyanne Conway has been under fire in the past week for referencing a Bowling Green “massacre,” which never actually happened, and returned to CNN Tuesday to offer a mea culpa… and to spar with anchor Jake Tapper.

“Let me just say we have a very high respect for the truth and I can only speak for me and I’m sorry that I misspoke,” she said. “We have a high regard for the facts.”

“I regretted it tremendously because I used the wrong word to describe something several times,” she went on. “I felt badly about that and I apologize and I rectify.”

“You cited a massacre that didn’t happen, you said the media didn’t cover it,” said Tapper.

“What I meant is the media didn’t cover the masterminds,” Conway answered. Despite her apology, Conway, in the 25-minute-long conversation, doubled down on her criticism of the media, standing by a list of 78 events related to global terror that the White House claims went “underreported” by the press.

“What the president is saying is … that there are other attacks that don’t get as much coverage,” she said.

She stopped short, however, of agreeing with President Donald Trump’s assertion that CNN is “fake news,” as he alleged in his first press conference as president. “Are we fake news, Kellyanne?,” pressed Tapper. “Is CNN fake news?”

“I don’t think CNN is fake news,” Conway said. “I think there are some reports everywhere, in print, on TV, on radio, in conversation that are not well researched and are sometimes based on falseness.”

Conway has faced backlash due to her comments on the truth in recent weeks. In an appearance on NBC’s “Meet the Press” last month, Conway defended White House press secretary Sean Spicer’s claims on the size of Trump’s inauguration crowd by calling them “alternative facts.” As host Chuck Todd corrected her, “Alternative facts are not facts. They’re falsehoods.”