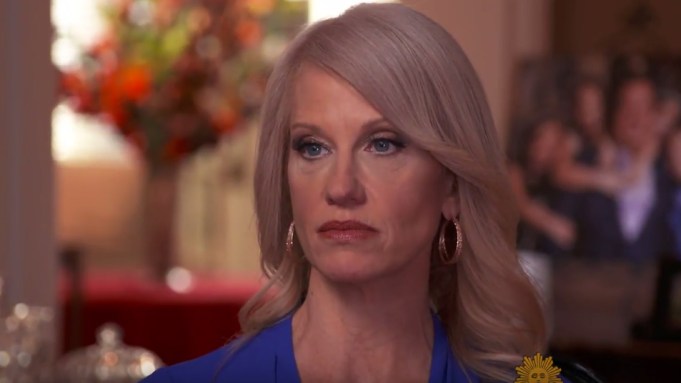 Kellyanne Conway’s defense of her “alternative facts” gaffe? Everyone makes mistakes — even the Oscars.

The White House senior adviser addressed the controversy in an interview with Norah O’Donnell on this weekend’s “CBS Sunday Morning,” comparing her own flub to the one that saw last Sunday’s Oscars crown “La La Land” best picture instead of “Moonlight.”

Asked about the meaning of “alternative facts,” a phrase she uttered while trying to defend false information put out by the Trump administration about POTUS’ inauguration crowd size, Conway said, “Well, it was alternative information and additional facts. And that got conflated. But, you know, respectfully, Norah, I see mistakes on TV every single day and people just brush them off. Everybody thinks it’s just so funny that the wrong — the wrong movie was, you know, heralded as the winner of the Oscars.”

O’Donnell asked Conway if she believes the gaffe hurt her credibility. “Well, I think the question presumes that it did and so now you’ve got that in the ether,” she answered.

The two also talked about Kate McKinnon’s continued impression of her on “Saturday Night Live.” In particular, Conway addressed a “Fatal Attraction”-esque sketch in which McKinnon’s Conway broke into Jake Tapper’s home in a desperate attempt to get back on TV.

“People really got outraged at that particular skit,” she said. “I had people left, right, and center coming to my, quote, ‘defense,’ saying it was over the top. But it was also untrue.”