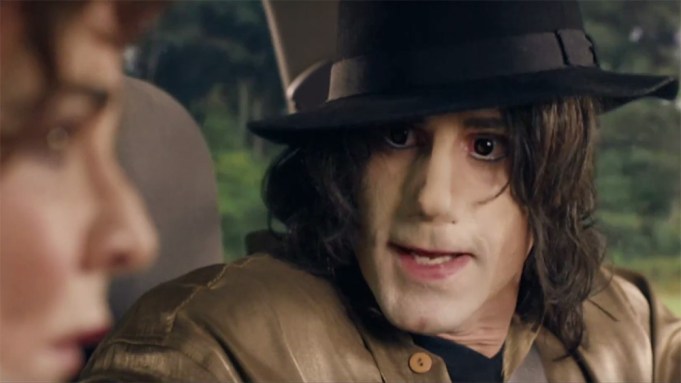 Following last year’s scandal over casting Joseph Fiennes as Michael Jackson in its road-trip comedy, Sky Arts released the first trailer for “Urban Myths.” The lighthearted Ben Palmer-directed piece tells the tale of Elizabeth Taylor, Marlon Brando, and Michael Jackson as they attempt to journey back to West Coast in the aftermath of 9/11. And if the trailer is anything to go on, it seems more “true…ish stories” will be told as well.

The fabled road trip isn’t the only historical story told in “Urban Myths,” it seems. It appears the special includes a larger set of stories, as confirmed in a final shot: “Urban Myths: A Brand New Collection of Comedies,” the words read.

Hitler (Iwan Rheon) and “Hitler’s friend” (Rupert Grint), as he is referred to in a superimposed credit, appear to be painting some of Hitler’s early artwork. The friend seems more like an assistant to the infamous mass-murderer rather than what most people would call a buddy.

Cary Grant (Ben Chaplin) and Dr. Timothy Leary, played by Rheon’s “Game of Thrones” co-star Aidan Gillen, sit side by side, leaning on each other and giggling in a different scene. Later on in the clip, Leary brings up LSD, and psychedelic images following after.

A few other ambiguous story lines including author Samuel Beckett driving with an unnamed man and Bob Dylan (Eddie Marsan) looking for someone named “Dave.” The more anticipated story is, of course, that of the road-tripping celebrity trio.

Brando (Brian Cox) seems utterly bored sitting in the backseat as their red car is stopped by a star-struck cop. Stockard Channing as Elizabeth Taylor later notes that Jackson has always had “such keen senses.” Fiennes’ Michael Jackson only just resembles the late singer, though he mimics his signature soft, high-pitched voice. And aside from that, we’re left guessing as to how he’ll convince audiences.

When Sky Arts announced Fiennes’ casting last year, a debate erupted as to whether or not it was appropriate for the white Brit to play a black man, even if he suffered from the melanin-depleting disease vitiligo. Adding to ongoing discussion of whitewashing and the lack of diversity in the entertainment industry, Twitter took the decision to task.

For his part, Fiennes rebuffed the controversy by noting Jackson’s skin later became “probably closer to my color than his original color.”

“I’m a white, middle-class guy from London … I’m as shocked as you may be,” he added, addressing the unusual casting choice.