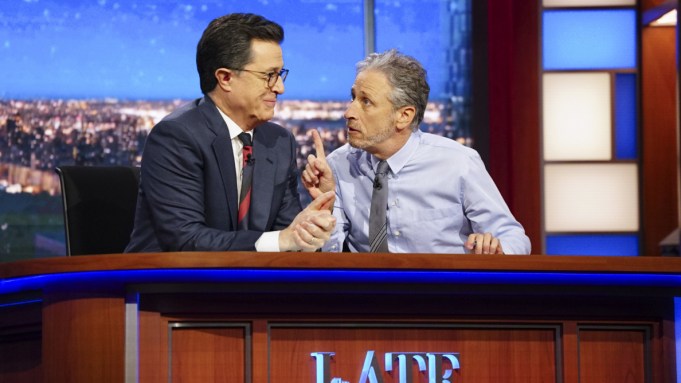 Former “Daily Show” host Jon Stewart returned to his familiar role of offering incisive perspective on politics and culture during a long guest appearance Monday on “The Late Show With Stephen Colbert.”

Colbert went to far as to observe “you miss this, don’t you?” when Stewart showed up at Colbert’s desk to discuss the disarray in journalism under the Trump administration. The two jokingly jostled for desk space in the segment that saw Stewart take aim and recent Trump statements, and he issued a pointed challenge to journalists. With pen and note paper in hand, Stewart looked like he was enjoying a brief return to form from his 17-year “Daily Show” run.

During the bit, Colbert took aim at the White House for blocking numerous outlets including CNN, Politico, The New York Times, The LA Times and more from a recent press briefing. “The root of all this conflict is that Donald Trump calls any story he doesn’t like ‘fake news,'” Colbert said, before he was interrupted by Stewart, who surprised him from underneath his desk, sending the “Late Show” audience into an uproar of excitement.

Last month, Stewart made an appearance on the “Late Show” with his former Comedy Central cohort, in which he called the first 10 days of Trump’s presidency “purposeful, vindictive chaos.”

Watch a snippet of the clip of Stewart here:

Also Tonight! #JonStewart emerges with a message for the mainstream media. #LSSC pic.twitter.com/tTK6ioheeA