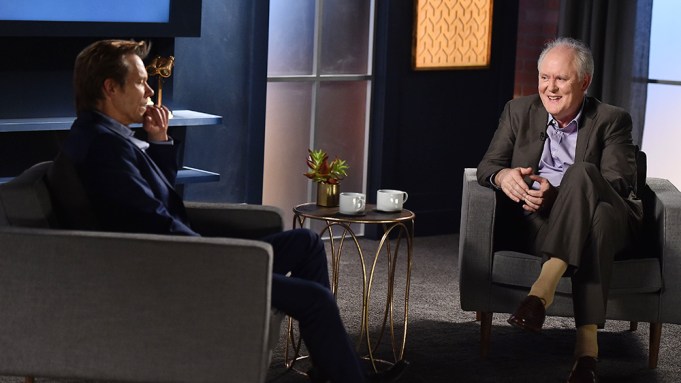 John Lithgow and Kevin Bacon sat down for an interview for Variety’s “Actors on Actors” series. For more, click here.

John Lithgow: I’m dying to hear you talk about “I Love Dick” and your whole experience with Jill Soloway. How did it all start?

Lithgow: Had you already seen “Transparent”?

Bacon: Yes, and I was crazy about it. And I knew Jill by reputation. I loved the pilot, but that was all that was available. She’s very into the process, and wanted to know if I was that person or not. Which was interesting. I loved it and loved the character, but I also felt like if he’s going to be a complete asshole for an entire season and that’s all you’re ever going to know about him, I didn’t really know what I could do with it beyond that. And she assured me that we would get a chance to see some complexity to the man.

Lithgow: Did you feel like [Jill] was taking you places you had never been before as an actor?

Bacon: Yes, I did sometimes. I felt like I was back in acting school. We did theater-type exercises, and the shooting of the show was incredibly loose.

Lithgow: Were you skeptical of that at first?

Bacon: I was very skeptical. I’m a little bit, what’s the word, jaded?

Bacon: Yeah. You know how it is now. We rarely walk onto a set [where] there’s anybody there that’s been around as long as we have. It’s a weird feeling.

Bacon: Still, you kind of feel like, “Can you leave yourself open to new experiences at this point?” And that’s what the show was for me. And I adored it. There was very little difference between the action [and the rehearsal]. We were just kind of in the action, the cameras came on, and we would move around and they’d float around.

Lithgow: Well I have to tell you, and this isn’t just flattery, I just thought it was the most exciting work I’d seen you do. It’s wonderful when a friend and somebody whose work you know really well goes somewhere where you’ve just never seen them go before.

Bacon: I feel the same way about what you did with [Churchill in] “The Crown,” which by the way was just spectacular. I don’t know how you approached it, but one would think that the approach for playing a character like that would be to find his power. But you took all of the history that was already there, that was ascribing power to this man, and you did the opposite. You found his weakness, his vulnerability, his sadness. That’s what was so breathtaking about it. We all have so much knowledge, because he’s so iconic in his strength, and then here you come, and even with your size, turn him into this sometimes sad, sometimes sort of childlike and just vulnerable kind of guy. That’s just really, really amazing.

Lithgow: Really so much of it was there in Peter Morgan’s conception of the character, but I had about four or five months between saying yes to this and actually starting it. I was of course so scared to death to be doing this role with a bunch of English actors in England.

Bacon: Why were you scared?

Lithgow: Well, I was a Yank. I was very excited, and I certainly trusted [director] Steven Daldry and [writer-creator] Peter Morgan because they had chosen me and they knew what they were doing, but I almost overcompensated. I’ve never done so much preparation for a role, just in terms of reading.

Lithgow: Biographies and finding all the audio and visual I could find. What I was most fascinated by was, at a certain point I no longer needed it. I just wanted to learn about this man; he was so interesting. His childhood was so incredibly mournful and sad. He was so neglected, he was so lonely, and he was a fuck-up. He was a terrible student. It was expected that someone in his position would go to Oxford or Cambridge. They knew he couldn’t hack it; he ended up at Sandhurst, the military academy, and did poorly there. You talk about his vulnerabilities and sadness and insecurity: that’s exactly what I worked from. I was playing him as a very old man with a whole new set of insecurities — old age and death and loss of viability. And of course he was incredibly powerful and arrogant, but the other side of that was to me absolutely as present and obvious. And it made the scenes just so vivid.

Bacon: And the relationship with [Queen Elizabeth] was so deep — touching, really.

Lithgow: Well, I was working with the exquisite Claire Foy. She was my Kathryn Hahn. An amazing actress and a wonderful person, you’ll be happy to learn. She’s just as good a person as she is an actress.

Lithgow: And just as there was a very distinctive school of acting and a modus operandi that Jill had created for you, I inserted myself into this English tradition. Every actor I was working with had gone to one of about five drama schools. Years ago, I did a year at LAMDA [London Academy of Music & Dramatic Art], and thank God for that. That was my calling card.

Variety’s “Actors on Actors” Season 6, presented by Shutterstock, premieres June 13 on PBS SoCal. You can watch the full interview above.