Continue to Variety SKIP AD
You will be redirected back to your article in seconds
Dec 11, 2017 8:49pm PT 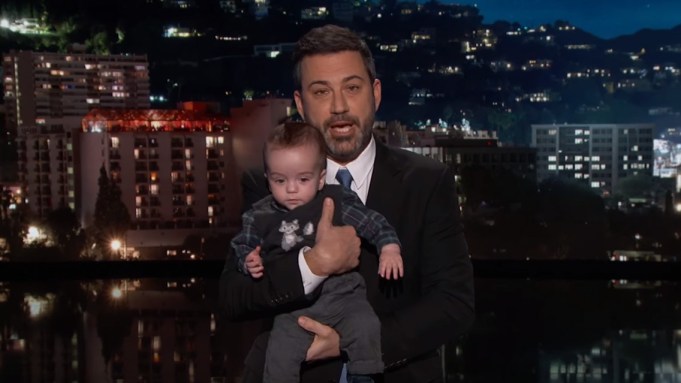 Jimmy Kimmel returned to his eponymous show Monday night and brought along his infant son Billy, who had undergone heart surgery the week previous, causing the host to take time off.

Kimmel teared up as he reassured his audience that Billy was just fine, and took the opportunity to call out Congress for failing to renew CHIP, or the Children’s Health Insurance Plan, which provides coverage to the kids of families who don’t qualify for Medicaid, but do not receive health benefits through their employer.

“It almost certainly covers children you know,” Kimmel said. “About one in eight children are covered only by CHIP.”

According to Kimmel, the bill has historically been a nonpartisan issue, but Congress members have begun using it as a bargaining chip to attempt to pass their tax plan.

“Parents of children with cancer, diabetes, and heart problems, are about to get letters saying their coverage may be cut off next month. Merry Christmas, right?” Kimmel continued.

“Imagine getting that letter, literally not knowing how you’ll be able to afford to save your child’s life. This is not a hypothetical — about two million CHIP kids have serious chronic conditions. I don’t know about you, I’ve had enough of this. I don’t know what could be more disgusting than putting a tax cut that mostly goes to rich people ahead of the lives of children.”

Kimmel asked his viewers to call their Congressional representatives to ask them to take a break from tax negotiations to renew CHIP, and #FundCHIPNow appeared at the bottom of the screen.

He ended by again assuring everyone that Billy was fine, joking that his doctors say “he’s probably on track to win at least a bronze medal in the Olympics in 2036.”