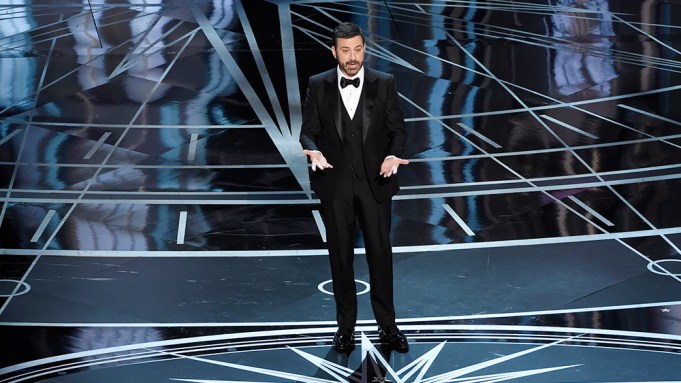 After taking a quick shot at Justin Timberlake, who kicked off the Oscars with a performance of “Can’t Stop the Feeling,” Jimmy Kimmel got straight to politics.

“The country is divided right now,” Kimmel said within the first few lines of his opening monologue on Sunday, explaining that he would not be the man to bring the country together. “There’s only one Brave Heart in the room and he’s not going to unite us either.” The camera cut to Mel Gibson.

Kimmel then earnestly encouraged everyone watching to reach out to someone during this divided time in the political climate. He then explained that he was ready to “bury the hatchet” with someone he has “had issues with” — Matt Damon.

“I’ve known Matt for a long time,” Kimmel said. “When I first met Matt, I was the fat one.”

Kimmel, who has a long-running gag-feud with the actor, then took a jab at Damon for giving Casey Affleck his Oscar-nominated role in “Manchester by the Sea” and making “a Chinese pony tail movie instead,” in reference to “The Great Wall.”

Then, back to politics, Kimmel reverted to another presidential slam. “I want to say thank you to President Trump,” he said. “Remember last year when it seemed like the Oscars were racist? That’s gone, thanks to him.”

The late night host rattled off a string of jokes about the nominated films and actors. His go-to joke, repeated several times with slightly different wording, is that no one in the audience saw any of the movies.

Then, before his time was up, Kimmel gave due attention to Meryl Streep, who sat front and center in the Dolby Theatre. Kimmel praised Streep’s many “overrated performances,” referencing Trump’s post-Golden Globes tweet. As the camera turned on her, Meryl tried in vain to hide behind her husband.

“Meryl Streep has phoned it in for over 50 films in her lackluster career,” Kimmel said. “She wasn’t even in a movie this year. We just wrote her name down out of habit.”

Kimmel called on the audience to give Streep a “totally undeserved round of applause” and the crowd rose immediately to give her a rousing standing ovation.

But Kimmel couldn’t let her go without referencing the drama surrounding Streep’s gown for the evening: “Nice dress, by the way.” he said. “Is that an Ivanka?”