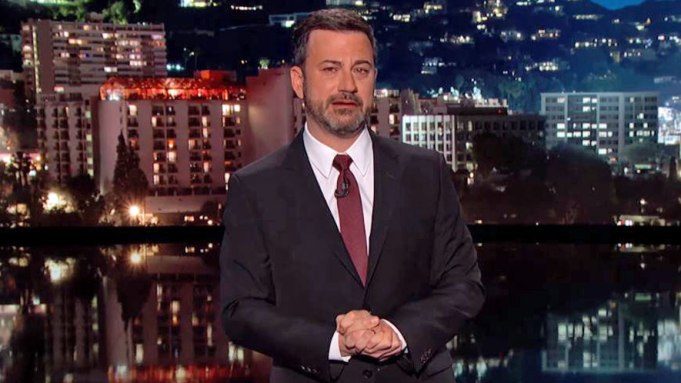 Jimmy Kimmel got personal tonight on “Jimmy Kimmel Live!,” opening up about complications following the birth of his son 10 days ago.

Kimmel broke down, tearing up through his nearly 15-minute long monologue. He recounted the “terrifying” few hours after Billy was born, how he started to turn purple about three hours after he was born, and a nurse at Cedars-Sinai Medical Center noticed and rushed him into emergency care.

Kimmel thanked the long list of doctors and nurses at Cedars-Sinai where Billy was born and Children’s Hospital Los Angeles where he was rushed for emergency heart surgery.

He also made a plea for politicians on both sides of the aisle to make sure Americans have access to healthcare especially for those with pre-existing conditions, as his son has after being born with a heart defect.

“If your baby is going to die it shouldn’t matter how much money you make,” he said.

He flashed a slate for Children’s Hospital Los Angeles on the screen urging viewers to donate.

“I hope you never have to go there but if you do you’ll see so many kids from so many financial backgrounds being cared for so well with so much compassion.”

Kimmel said the surgeon “did some kind of magic I can’t even begin to explain. It was the longest three hours of my life.”

Kimmel also broke down while thanking his family, friends, production crew and ABC executives for supporting his family during the frightening experience. He showed a picture of Billy covered in tubes and medical equipment, and then another picture of a smiling infant. (“Poor kid, not only did he get a bad heart, he got my face,” joked Kimmel.)

“We had atheists praying for us,” said Kimmel. “Even that son of a bitch Matt Damon sent flowers.”

He urged Congress not to make cuts to the National Institutes of Health.

“Don’t let their partisan political squabbles divide us. This is not football. This is not about picking teams. We are the team — it’s the United States of America.”

The host will now be on paternity leave for the rest of the week while his friends guest-host the show in his absence (assuming there isn’t a writers strike, in which case the show will go dark). The lineup will be:

In addition, Kimmel will skip his usual standup performance at ABC’s May 16 upfront presentation in New York in order to stay close to his family.