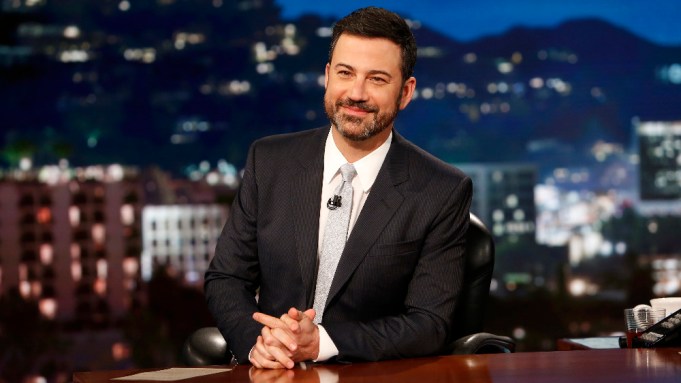 Jimmy Kimmel kicked off Monday night’s episode of “Jimmy Kimmel Live!” by recapping a Twitter exchange he became involved in over the weekend with Donald Trump, Jr., referencing the Harvey Weinstein scandal playing out in Hollywood while simultaneously calling out Donald Trump.

Trump, Jr. had challenged Kimmel to include coverage of Weinstein, who was fired from his company after numerous women accused him of sexual harassment in a New York Times exposé, in his monologue. Kimmel obliged.

“The insinuation was that we, as part of the biased, left-wing media propaganda machine wouldn’t say anything about [the scandal] because he’s a Democrat,” Kimmel explained. “Never mind the thousands of jokes about Bill Cosby and Bill Clinton and all the other Bills of that ilk.”

Kimmel then honed in on the controversy surrounding Weinstein’s donations to the Clinton campaign.

“People are pointing out the fact that Harvey Weinstein was a Clinton supporter and listen, I’m not defending Hillary Clinton,” he began. “Fact is, her campaign did take money from what turned out to be a high-profile man who’s been accused of sexual harassment multiple times — and not just one of them, by the way. She took money from two of them. Harvey Weinstein and Donald Trump, who donated to Hillary’s campaign in 2008.”

“So anyway, note to DJTJ: next time you’re defending your father and you think it’s a good idea to draw a comparison between him and a freshly-accused sexual predator? Don’t. It doesn’t help,” he finished.

Kimmel went on to provide the joke about Weinstein, as promised.