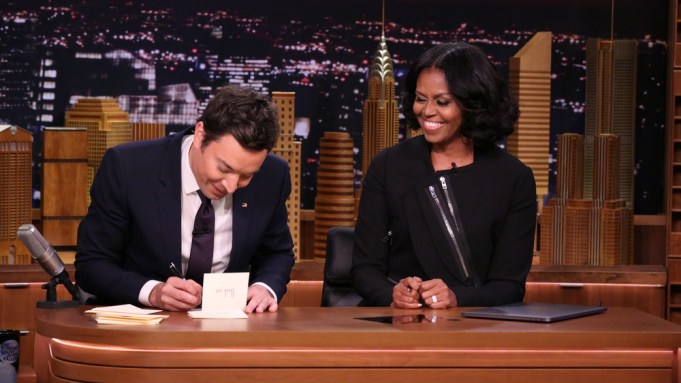 “The Tonight Show” host Jimmy Fallon honored the outgoing first lady with a farewell episode dedicated to her. Michelle Obama appeared and shared stories with her old pal and frequent collaborator on his show Wednesday night, closing a chapter in late-night talk show history.

In the episode, the first lady was the main event. With good humor and witty comebacks, Obama wrote thank you notes on Fallon’s signature segment, played “Catchphrase” with Jerry Seinfeld and Dave Chappelle, and received a serenade from Stevie Wonder. She also surprised fans recording her goodbyes, bringing more than one of them to tears.

Obama is no stranger to the Fallon brand of comedy. In one thank you note, she wrote to her husband, “Thank you, Barack, for proving you’re not a lame duck but my very own silver fox.”

The two have competed in potato sack races in the White House, performed in Fallon’s “Ew!” sketches, and participated in several interviews over the years. The Obamas were the first First Family to appear on the talk show.

“I’m just so thankful. Thank you for your friendship and your leadership,” Fallon told his “Evolution of the Mom Dance” co-star. “Please come back on the show as a citizen.”

Though the pair did not reprise any of their skits, they discussed post-White House living, the first lady’s various campaigns on exercise and education, and Obama’s passion for kids and their ongoing successes.

She added, “I will continue to stay involved in these issues as long as I live.”