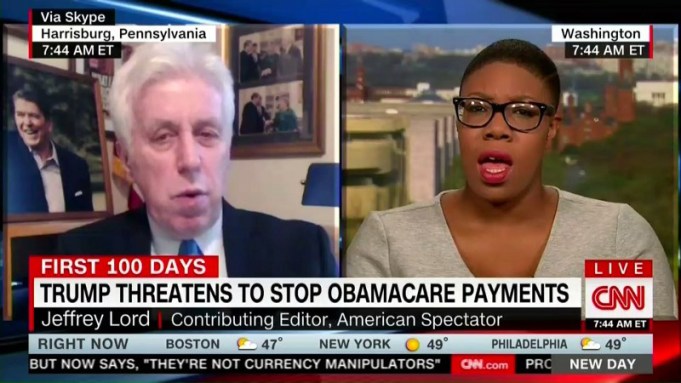 Lord said Trump should be thought of as the “Martin Luther King of health care” during an appearance (via Skype) on Alisyn Camerota’s “New Day.” Fellow CNN commentator Symone Sanders, a Democratic activist, fired back immediately.

“Jeffrey, you do understand that Dr. King was marching for civil rights because people that looked like me were being beaten,” she said. “Dogs were being sicked on them. Basic human rights were being withheld from these people merely because the color of their skin.”

The former Ronald Reagan aide was arguing that the president’s efforts to rally support around healthcare reform is similar to King’s fight for civil rights legislation.

“When I was a kid, President Kennedy did not want to introduce the civil rights bill because he said it wasn’t popular, he didn’t have the votes for it,” he added. “Dr. King kept putting people in the streets in harm’s way to put the pressure on so that the bill would be introduced. That’s what finally worked.”

Lord returned to the cabler in the evening to address his remarks on “Anderson Cooper 360.°”

“I wasn’t comparing President Trump and Dr. King, who, by the way, the latter was a hero of mine when I was a kid,” Lord insisted.

“What I was doing was comparing their strategy. Dr. King quite specifically — and I knew this when I was talking about this on air this morning — was talking about creating a crisis,” he added before reading an excerpt from King’s Letter From Birmingham Jail about “non-violent direct action.”

“Donald Trump isn’t taking to the streets; he has the power of the presidency,” Lord said. “But clearly, if he withholds payments from insurance companies, which Wall Street Journal said would result in a meltdown, that’s a crisis. … So he is doing the same thing: creating a crisis to get to a negotiation. That’s the point. Period.”