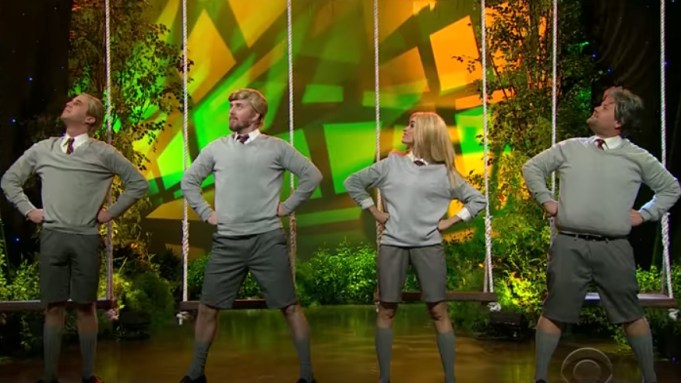 Broadway might just have another smash-hit political musical headed its way: “Donald: The Musical”… or maybe not. However, at least James Corden is willing to give it a chance!

“The Late Late Show” host took to the stage with a trio of musical stars to perform a parody of the song “When I Grow Up” from “Matilda the Musical,” only this time, President Trump, Steve Bannon, Sean Spicer, and Kellyanne Conway were the ones swaying on the swing-set, dreaming of the political chaos they might cause when they grow up.

“When I grow up, I will be president and build big walls, ban Muslims, play with Putin’s balls, grab p—–s of the lady grownups,” sings Trump, played by Australian comedian Tim Minchin, who wrote the original song as part of his Tony-winning score for “Matilda.”

The political figures take it in turns to declare their intentions, reflecting their current, more controversial policies.

“When I grow up, I’ll be press secretary of this land and lie about sizes of crowds and hands, ignore climate change till earth is blown up,” sings “Dear Evan Hansen” star Ben Platt as a young, bright-eyed Spicer.

The quartet burst into a harmonized chorus at one point, as they swing together in front of a generically leafy garden background.

Corden plays a suitably messy-haired Bannon in the sketch, who promises to “put (his) Breitbart fist inside (his) puppets’ inside bits” when he grows up.

“Timeless” star Abigail Spencer rounds out the lineup as a convincing Conway, who claims that “if the facts don’t suit (her) narrative, (she’ll) just believe alternatives.”

Although the sketch works to bring a little humor to the divisive current state of affairs, it ends on a surprisingly positive and motivational note, encouraging viewers to “set it right” and asserting that sometimes that means being “a little bit naughty.”

“If you think the ending is fixed already, you might as well be saying you think that we’re okay, and that’s not right, and if it’s not right, you have to set it right,” the foursome sing in unison as they stand up and defiantly rip off their name-tags and toss them away. “‘Cause nobody else is gonna put it right for me, nobody but us is gonna change this story, sometimes you have to be a little bit naughty.”