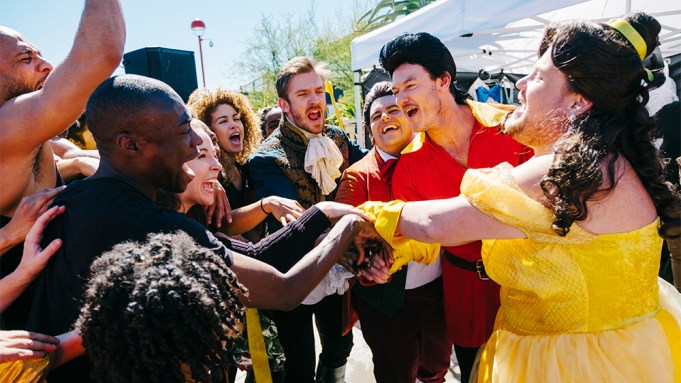 If you often drive past Beverly Boulevard and Genesee Avenue in Los Angeles, you may have been lucky enough to catch James Corden and his Crosswalk Theater Company perform an abridged version of the Disney’s “Beauty and the Beast” … in the middle of the road.

If not, don’t fret. Corden aired the segment featuring some of the stars of the live-action film — Josh Gad, Luke Evans, and Dan Stevens — Wednesday night on his “Late Late Show.” The three reprised their roles as LeFou, Gaston, and the Beast, respectively, to sing classic songs from the movie, including “Belle,” “Beauty and the Beast,” “Gaston,” and “Be Our Guest.”

Corden took his domineering persona to the parking lot, where he ran the company through drills and exercises. Stevens seemed particularly nervous. His shocked looked at hearing the performance venue sparked laughter in the audience.

“I mean, he just gave us the exact same roles we had in the movie so I don’t see why we had to do any of that,” Stevens questioned.

Corden portrayed Belle, a role he was born to play. His screams to get off the road, accompanied by honking cars, only bolstered the humor of the sketch.

“There was someone looking through their sunroof,” he beamed. “That was a standing ovation.”

Watch the segment here or above.