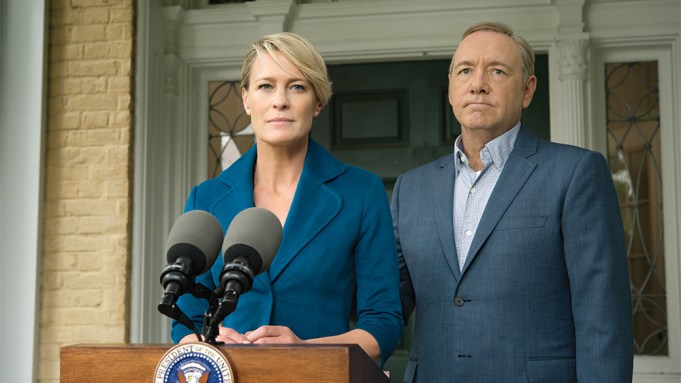 While the eyes of the country are on Washington, D.C. for the presidential inauguration, “House of Cards” announced the date for yet another transition of power: the premiere of Season 5.

With a post on Twitter, the Netflix drama revealed that the DC-set drama will return May 30. The date was revealed at the end of a somber recitation of the Pledge of Allegiance — and the ominous message “We make the terror.” Netflix has also released the same teaser on YouTube, which you can watch above.

We make the terror. pic.twitter.com/VpChwGOSMj

The line is a recall of the quote from the season finale, when president Frank Underwood (Kevin Spacey) said, “We don’t submit to terror. We make the terror.”  His wife, Claire (Robin Wright), subsequently broke the fourth wall for the first time. The two have been each other’s strongest allies, but upon the series’ return, Claire and Frank’s relationship will begin to show some cracks.

Melissa James Gibson and Frank Pugliese serve as co-showrunners on the fifth season of the Beltway drama, replacing Beau Willimon, who stepped down from the series after running it for the first four seasons. “House of Cards” also stars Michael Kelly, Jayne Atkinson, Neve Campbell, Derek Cecil, Paul Sparks, and Joel Kinnaman. It is produced by Donen/Fincher/Roth and Trigger Street Productions, Inc. in association with Media Rights Capital for Netflix.