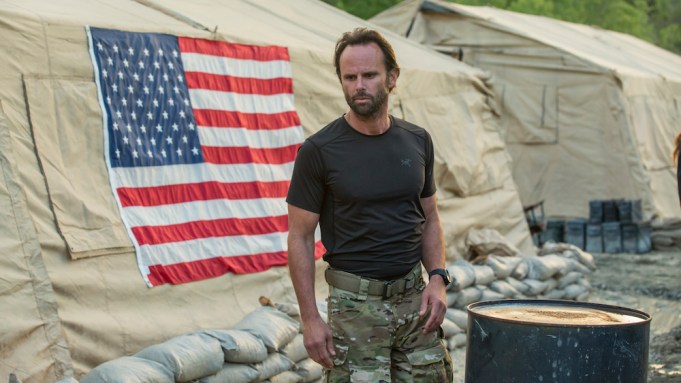 History’s new drama “Six” doesn’t premiere until later tonight, but Variety has an exclusive clip of Walton Goggins and his band of Navy SEALs in action.

In the clip from tonight’s premiere, which you can watch above, troop commander Rip (Goggins) and the other SEALs in his unit attempt to figure out how to treat an injured woman who could also be a suicide bomber. Rip and his troops — Bear (Barry Sloane), Caulder (Kyle Schmid), Buddha (Juan-Pablo Raba), Chase (Edwin Hodge), Buck (Donny Boaz), and Fishbait (Jaylen Moore) — are tasked with some of the most dangerous missions in the military.

The “Muttaqi” that Rip refers to in the clip is the Osama bin Laden-esque mastermind whose actions have so unnerved Rip that he commits an act even his own men think is over the line, setting off a chain of events that will eventually lead to Rip’s kidnapping by Boko Haram. It’s up to his men, led now by Bear, to come to the rescue.