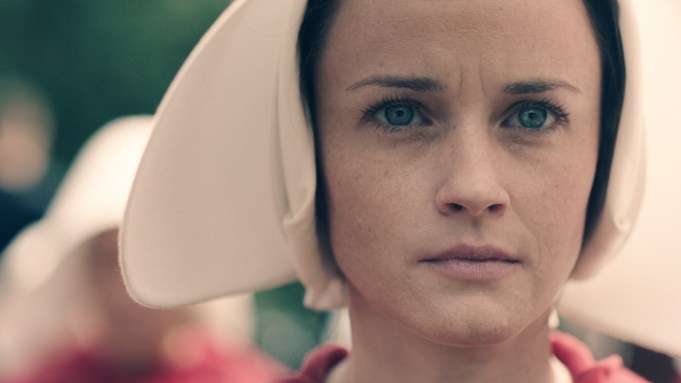 Hulu has released the first teaser for its upcoming dystopian drama “The Handmaid’s Tale,” starring Elisabeth Moss, Samira Wiley, Joseph Fiennes, and the recently revealed Alexis Bledel (among others). The trailer, which you can watch above or on YouTube, introduces us to the fictional world of the Republic of Gilead, the authoritarian theocracy that has supplanted the United States, where women are nothing more than wives, servants, or breeders, referred to as “handmaids.”

Elisabeth Moss’ Offred is one such handmaid. “I had another name, but it’s forbidden now,” Offred explains in the trailer. “So many things are forbidden now.” Offred once had a husband, and child, we see, who were taken from her. She and the other handmaids are overseen by Aunt Lydia (Anne Dowd), who intones, “Ordinary is just what you’re used to.”

The 10-episode series, based on Margaret Atwood’s novel of the same name, will debut on Hulu on Apr. 26. The series hails from MGM Television. Bruce Miller created, wrote and will executive produce the show, along with Fran Sears, Warren Littlefield, Ilene Chaiken and Daniel Wilson, who worked on the 1990 “Handmaid’s Tale” movie, which starred Natasha Richardson. Reed Morano will direct and exec produce the first three episodes.