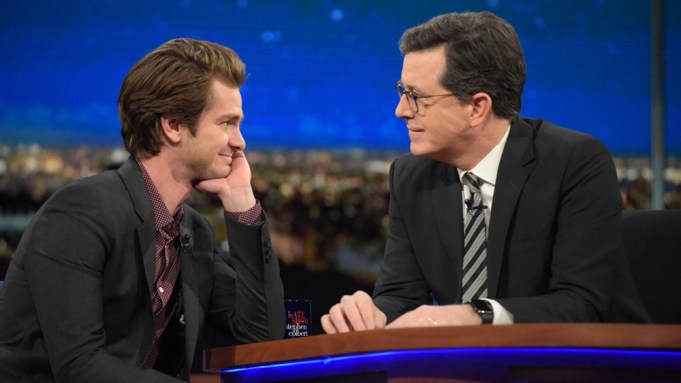 Andrew Garfield continued his streak of spreading love and good cheer this week during his appearance promoting his new movie, “Silence,” on “The Late Show With Stephen Colbert” Tuesday night. His and Ryan Reynolds’ kiss-seen-around-the-world from Sunday may have gotten an explanation, but it also has a new competitor for top Garfield smooch.

“You had one of the most memorable moments,” Colbert said of the Golden Globe kiss between the two actors. After Reynolds lost the best actor in a comedy or musical category for his role in “Deadpool” to Ryan Gosling, his table-mate and friend Garfield swooped in with a kiss of comfort. The lip-lock only lasted a few seconds but, as Colbert put it, “stole the show.”

“I just wanted Ryan to know that I loved him no matter whether he won or lost,” Garfield explained. “It doesn’t matter. It’s how you play the game. He showed up. He gave his all. It doesn’t change anything in my heart.”

Colbert went on to note that Garfield, nominated at the awards show for his work in World War II drama “Hacksaw Ridge,” seems very comfortable kissing other men.

“I mean, I don’t even understand the question,” Garfield joked.

“I’m totally comfortable with it, too,” added Colbert.

And then, almost in slow motion, the two meet for a kiss of their own. After separating, Colbert goes back in for a second. The rarely flustered late-night host seemed to be left speechless.

Who will be next, Andrew?