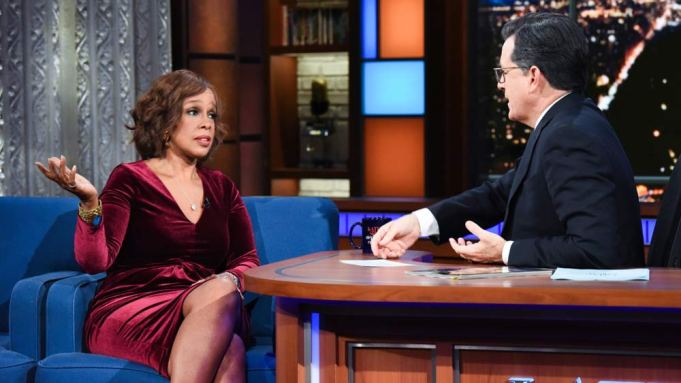 Stephen Colbert opened Tuesday’s episode of “The Late Show” with a biting monologue aimed at the recent allegations of sexual misconduct against Charlie Rose and the subsequent cancellation of Rose’s eponymous show. Just after, Rose’s former co-host Gayle King sat down with Colbert and explained why she decided to keep her appearance.

“I came this close to canceling,” she began. “We booked this weeks ago because I was here to talk about Oprah’s favorite things, Merry Christmas, Happy Holidays.”

Colbert responded that he couldn’t blame her, and commended her coverage of the events surrounding Rose.

“I was very proud of CBS News and what you and Norah and everyone at ‘CBS This Morning’ did, covering the allegations against Charlie Rose as news,” he said. “Objectively, and fully.”

“But that’s what you have to do,” she responded. “To be honest with you, it isn’t easy. It’s still very painful, it’s still very hurtful. Charlie and I — we worked together, have been friends. But when you think about the anguish of those women, despite the friendship, you still have to report the news.”

She added that Colbert’s monologue had made her wince.

“Well, you did your job this morning, I did my job today,” he said, earning applause from the audience. “We have different jobs.” King conceded his point: “I thought about that too.”

“It’s interesting, when you were doing the monologue about other people, I’m like, ‘Ah!'” King continued. “And then it was Charlie, and I was like, ‘Oh, he’s a friend, I don’t like that, that’s difficult,’ and then I thought about what these women are going through and I don’t like that either.”

Rose co-hosted “CBS This Morning” with King and Norah O’Donnell, but was fired Tuesday after allegations of sexual harassment from eight women came to light in a report by the Washington Post.