‘Game of Thrones” Kit Harington on Whether Daenerys, Jon Snow Will Meet: ‘I’m Sure They Will’ 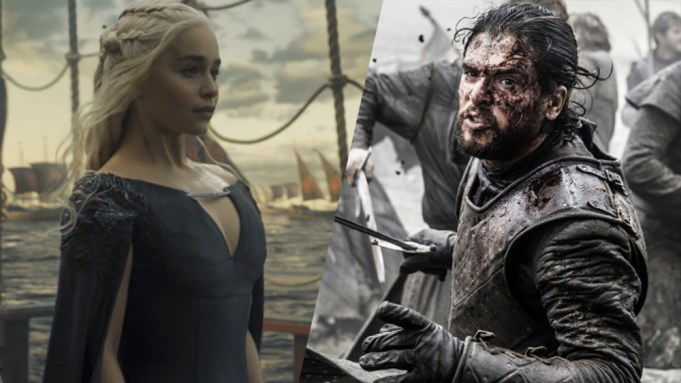 HBO
SPOILER ALERT: Do not read if you have not watched Season 6 of “Game of Thrones”

“Game of Thrones” fans have long been awaiting a Jon Snow-Daenerys Targaryen team up, and as Season 7 of the megahit HBO series kicks off, they may just get their wish.

According to Kit Harington, the Mother of Dragons and King of the North/Bastard of Winterfell will more than likely be crossing paths in the near future. “I’d love to work with Emilia [Clarke],” Harington told Variety. “I’d love our characters to meet. I’m sure they will, but it awaits to be seen what kind of relationship that will be. Whether they’ll fight, whether they’ll get together, or become an alliance or not an alliance. That’s going to be an interesting thing when that happens.”

As fans learned at the end of Season 6, Jon and Daenerys are connected in a very powerful way: by blood. Bran was able to use his magical abilities to look into the past, where he witnessed his aunt Lyanna Stark giving birth to Jon, who is in fact the son of Prince Rhaegar Targaryen, making Daenerys Jon’s aunt. It seems natural to assume that, given the good nature of both characters, they would team up to defeat their common enemies. But Jon’s true lineage also means he has a strong claim to the Iron Throne, putting him in direct conflict with Daenerys’ plan to take the Seven Kingdoms for herself.

Daenerys and Jon are also two of only a handful of characters to have survived from the very first episode of the series, which is notorious for killing off major characters. So how has Jon managed to cheat death (more or less) thus far?

“I don’t know how he’s done it,” Harington said. “He’s technically died and come back to life which is some feat. In narrative terms, Jon Snow is one of the people you’re rooting for and the heroes in this story and I think we need some hope in this story. That’s why we keep following him. That’s why he keeps making it through. He’s a scrapper. He’s the guy whose continually in great peril and continually somehow manages to make it out. That’s what makes him who he is.”

Of course, the biggest question is how the world is going to deal with the impending threat of the White Walkers and the fearsome Night’s King, who are poised to wipe out everyone in their path. “I don’t think [Jon] thinks anyone is ready for the battle that lies ahead,” he said. “I think that’s his major problem. He knows that there’s this massive army amassing north of The Wall and that’s his main priority. I think he knows this world is very, very unready and un-united and that’s his major task going forward this season.”