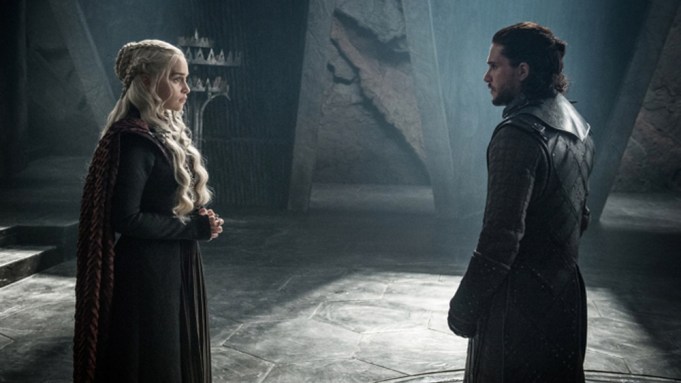 SPOILER ALERT: The following contains spoilers for the Season 7 finale of “Game of Thrones,” titled “The Dragon and the Wolf.”

The Jon Snow-Daenerys Targaryen romance, sparked earlier this season and finally coming to fruition when the two hopped into bed together in the finale, has forced fans to choose between the inherent chemistry of the characters and the ickiness of incest due to the revelation — in a voiceover during the sex scene, no less — that the two are aunt and nephew.

Evidently, fans aren’t alone in feeling a bit unsettled over the pairing. In a cast commentary video from HBO, Kit Harington and Emilia Clarke, who play the two lovers, aren’t entirely certain how they feel about it either.

“For us, as actors, it’s just weird,” Clarke said. “The reality of what they are to each other? I don’t know how that’s gonna…I mean, I think kind of (disgusted sound) might be the reaction.”

Harington joked that, presumably while filming the scene, he liked to look at Clarke and pretend to gag before doing another take.

“I think it’s an inevitability from about halfway through the season that Jon and Daenerys are gonna fall into bed together,” Harington explained.

“It’s ‘Game of Thrones,’ there’s a long history of romance not ending well on this show,” he said.

No doubt Jon’s confirmed parentage — his true father, Rhaegar Targaryen, was Daenerys’ much-older brother — will have immense repercussions in the final season, as it makes him the rightful heir to the Iron Throne (assuming anyone still cares about lineage). Not only will this recast how the current contenders for the throne are viewed, but it almost definitely throws a wrench into his budding relationship with Daenerys — she’s unlikely to take kindly to the idea of backing off her claim in favor of Jon, despite any feelings she may have for him.