‘Fuller House’ Season 3 Will Include a Musical Number, Wedding and Trip to Japan (Watch) 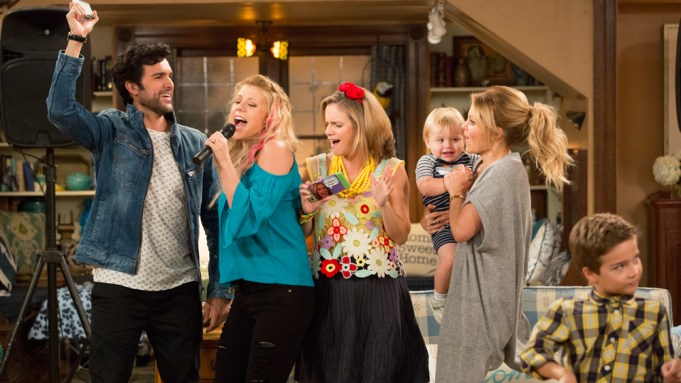 In its upcoming third season, Netflix’s “Fuller House” will embrace its family sitcom roots more than it ever has. While the show has always explored the complicated dynamics between family members, this year it dives deeper into classic sitcom storylines from summer school, to planning a wedding, to a family vacation in Japan.

And they’re kicking it all off with a special musical number, revealed the stars and executive producer Jeff Franklin to Variety at the Paley Center for Media’s Fall TV Preview for “Fuller House.”

“We try very hard not to repeat the stories or very special episodes of the original show,” says Franklin. “We don’t think in those terms anymore, but there are certain themes that are universal to all family shows, like these relationships and special moments you spend with loved ones that will always be at the center of what our show is.”

The third season of “Fuller House” starts on the first day of summer break, which lends itself to more celebratory episodes (“We do a fourth of July episode for the first time,” reveals Andrea Barber), as well as more opportunities for both the kids and the adults to get up to classic sitcom antics.

“The kids are in summer school, and they go on vacation, and that’s really fun,” says Jodie Sweetin. “It’s a season we never got to do on the original show because we were always in production September through spring with the traditional network schedule. But now we start off with a really fun, big, silly musical number to kick off the season.”

And while the original “Full House” saw the Tanner family taking vacations to Disneyland and Hawaii, this time around the gang will be venturing much farther for their vacation episode: to Japan. “It doesn’t happen until the second half of the season, though,” Sweetin says. (Netflix is splitting the third season of “Fuller House” into two parts, with the first premiering in September and the second in December.)

One aspect about “Fuller House” that is notably different from the original series, though, is a commitment to relationship stories and love triangles involving the core characters. “Full House” saw Danny (Bob Saget) and Joey (Dave Coulier) date occasionally, as it did with the teenage kids in later years, but the main romantic relationship throughout its run was between Jesse (John Stamos) and Becky (Lori Loughlin). “Fuller House,” on the other hand, has put D.J. (Candace Cameron-Bure) in the middle of two men, her high school sweetheart Steve (Scott Weinger) and new colleague Matt (John Brotherton).

“Netflix has been encouraging us very strongly to do serialized storytelling, and that’s something we never really worried about on the old show,” Franklin says. “There’s a large part of our audience that’s rooting for D.J. and Steve to pick things up 25 years later, so we throw obstacles in their way to keep people invested from episode to episode throughout the season. There are some surprises in store.”

The third season starts with D.J. and Matt taking a big step in their relationship, while Steve is engaged to his girlfriend. The wedding the show is working towards this year is Steve’s, but given the push-pull of his and D.J.’s relationship, whether or not he actually walks down the aisle is still in question. Meanwhile, Kimmy and her husband, from whom she has been separated (Juan Pablo Di Pace), are trying to make their relationship work.

And Stephanie and Kimmy’s brother Jimmy (Adam Hagenbuch) are still going strong, too. “Stephanie and Jimmy is a very big storyline, and just exploring the fact that she wants to become a mom and how that’s going to happen or if that’s going to happen is a very big piece of her storyline this year,” Sweetin says. “The original show had a lot of kid-centric storylines and not as much of the romantic stuff, but now people have a 30-year history with us, and they’re more invested in following their relationships.”

For those “Fuller House” fans who have been along for the ride since “Full House” first premiered, the third season will also set out to provide more proper closure for Danny and his ex Vicky’s (Gail Edwards) relationship. “I wasn’t there for that, that’s not my fault,” Franklin says of how the couple ended their relationship when Vicky took her dream job in New York in the seventh season. “We’re righting some wrongs this season!”

Other blasts from the past on the upcoming season will be Gia (Marla Sokoloff), who is more involved now that her daughter is in summer school with D.J.’s eldest son (Michael Campion), as well as Mr. Bear, who Sweetin had to bring back to set from her own home where he has lived since the original series wrapped, along with some other pieces of show memorabilia in the background in the Gibbler house. “If you remember Kimmy used to ride a unicycle,” Barber says. “So there might be a unicycle in the Gibbler house, as well as some other Easter eggs. Pause the show and take a look around.”

Guest stars Franklin would still like to see return  include Jaleel White, who made an appearance as his “Family Matters” character Steve Urkel in the fourth season of “Full House,” as well as the Beach Boys. But for DJ, Stephanie and Kimmy, the band that means the most is New Kids on the Block. Barber says she wants the New Kids on the Block to be to “Fuller House” what the Beach Boys were to “Full House. “Let’s get them on the show once or twice a season!” Barber says. “Who could say no to that?”

“Fuller House” season 3 will premiere on Netflix on Sept. 22.

Watch the trailer for “Fuller House” season 3 below: