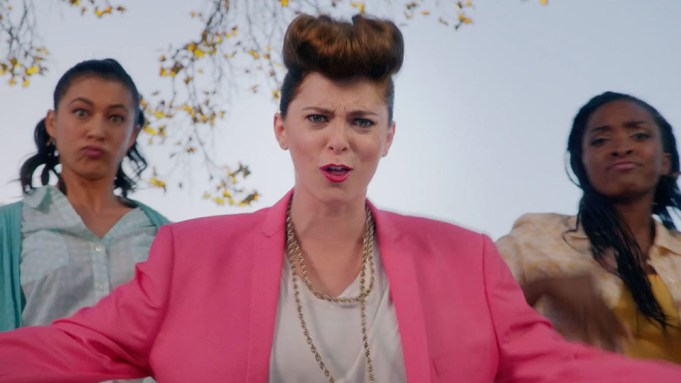 Courtesy of the CW

Feeding a child a smashed banana wrapped in a tortilla and stabbing his error-ridden homework with a kitchen knife might not be great parenting, but Rachel Bloom from “Crazy Ex-Girlfriend” proves that it’s pretty funny.

In a catchy musical number called “So Maternal,” which will feature in the upcoming Season 2 episode “Who Is Josh’s Soup Fairy?,” the show’s central character Rebecca Bunch channels David Bowie, ’80s boogie music, and Bruno Mars’ “Uptown Funk” to show everyone how good (or bad) she would be at parenting.

“Parenting ain’t harrowing, demanding or traumatic,” Bunch sings while bouncing down a suburban street. “Let’s face facts, moms say that when they’re not this good at it.”

In the two-minute song, Bunch breaks down her parenting skills to a funky beat while sporting a ginger-quiff, a pink jacket, and shiny gold pants. The number also comes complete with back-up dancers, a fake mom-centered podcast, and even a tongue-in-cheek Gwyneth Paltrow reference.

However, both the dance number and Rebecca’s prolific mom skills turn out to be figments of her imagination, as she is brought back down to Earth 12 hours later when she faces the reality of having to babysit Paula’s son, Tommy.

The new episode premieres as part of a two-episode airing of “Crazy Ex-Girlfriend” at 8 p.m. on Friday, Jan. 6 on the CW.