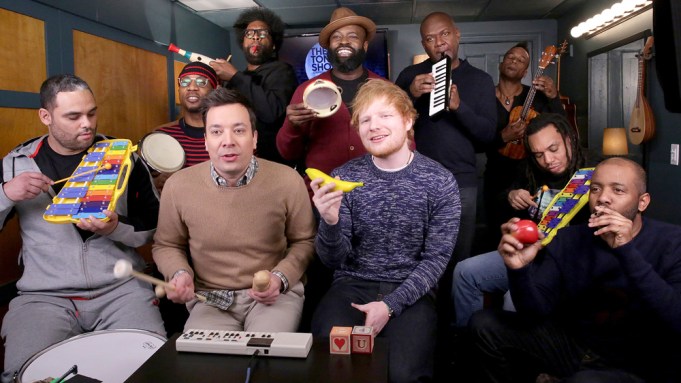 Ed Sheeran followed the lead of Adele, Carly Rae Jepsen, Mariah Carey, and other musicians to recreate one of his hit songs using classroom instruments.

Sheeran joined Jimmy Fallon and The Roots on Monday’s episode of “The Tonight Show” for a performance of his smash single “Shape of You.”

The band used plastic xylophones, a melodica, ukulele, guiro, kazoo, and tambourine, as well as an apple-shaped shaker and blocks to recreate the radio staple. In addition to providing vocals, Sheeran also got his hand on an instrument of his own: the banana-shaped shaker.

“Shape of You,” from Sheeran’s upcoming album “Divide,” debuted at number one on the Billboard Hot 100 and has topped the chart for five non-consecutive weeks.

Christina Aguilera (“Your Body”), Idina Menzel (“Let It Go”), Meghan Trainor (“All About That Bass”), Madonna (“Holiday”), Metallica (“Enter Sandman”), and Robin Thicke (“Blurred Lines”) are among the other musicians who’ve jammed in the “Tonight Show Music Room.”

Earlier on in last night’s show, Fallon — like all other late-night hosts — reacted to the Oscars best picture blunder during his monologue, saying that “La La Land’s” filmmakers have now joined a support group with Hillary Clinton and Atlanta Falcons supporters.