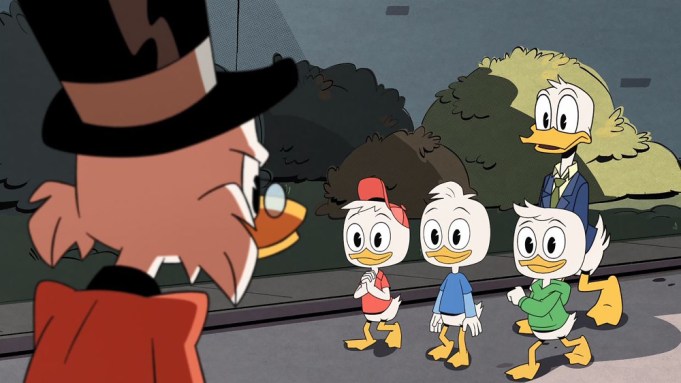 Prepare for some more quackingly good adventures: Not only is the “DuckTales” crew returning summer, they’re getting a second season order before the first even premieres. Disney XD officially gave the reboot a renewal on Thursday.

The network also released a first look trailer at their upcoming reboot of the classic Duck family-centered animated series, which originally aired in the late 1980s and will return in revamped form this summer.

The trailer, which you can watch above, gives the audience a taste of the new retro, comic-book-like animation style as well as a sample of the rollicking adventures to expect from Scrooge McDuck and his great-nephews, Huey, Dewey, and Louie.

“I’m Scrooge McDuck, I made my name being tougher than the toughies and smarter than the smarties,” announces the billionaire, top hat-sporting McDuck, voiced with gusto by David Tennant.

However, at first, his rhyming great-nephews appear skeptical of their great-uncle’s prowess — after all, their uncle is Donald Duck, “one of the most daring adventurers of all time,” as Webby Vanderquack (Kate Micucci) accurately points out in the trailer. Fans of the original series will also note the return of the original theme song. (Disney XD had released a video of the cast singing the original theme song in December.)

“I’m back,” exclaims McDuck at one point, before giving viewers an idea of what to expect and causes Huey, Duey and Louie to change their minds. “Uncharted territory, bold new discoveries!”

“You guys, our family is awesome,” Dewey emphatically concludes.

This updated version of “DuckTales” will also star Danny Pudi, Ben Schwartz, and Bobby Moynihan as Huey, Dewey and Louie respectively, as well as Moynihan’s fellow “SNL” star Beck Bennett in the role of Launchpad McQuack.