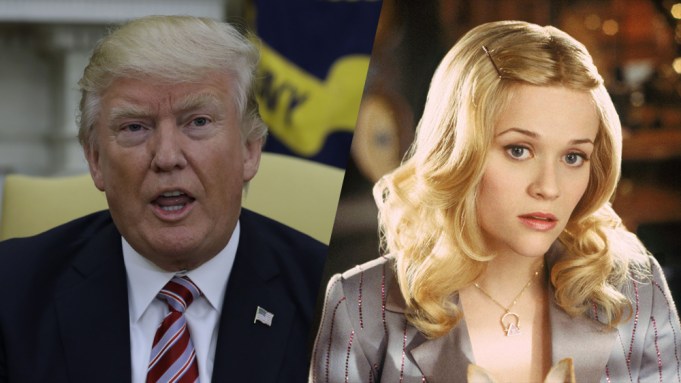 Fallon began by insinuating that Trump’s speech was comprised solely of platitudes.

“(Trump) said, ‘Always have the courage to be yourself and chase your dreams,'” Fallon said. “And then he stopped talking because he ran out of fortune cookies.”

After some references to the many firings and resignations in Trump’s administration since his inauguration, Fallon said that while watching the commencement speech, it sounded “kind of familiar.” He played a clip of Woods’ speech cut with clips of Trump’s speech in which Trump appeared to be saying almost exactly the same words as Woods, though likely in a different order. Guest Jeffrey Tambor appeared just as amazed as the audience.

Fallon chalked up the similarities in Trump and Woods’ speeches to coincidence and went on to play an edited video of Trump and Russian president Vladimir Putin sitting next to each other at a piano playing a childish rendition of “Heart &amp; Soul” by Hoagy Carmichael together. The clip used footage of Putin playing the piano while waiting for a meeting with Chinese leader Xi Jinping a few days previously.

Watch the entertaining clip here or above.