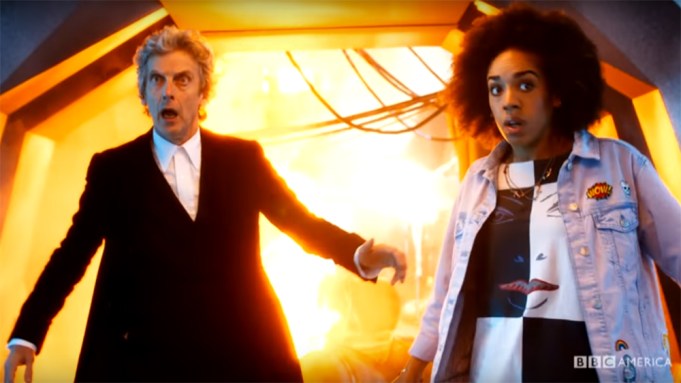 The Season 10 premiere of “Doctor Who” is rapidly approaching, and the BBC has released a new trailer showing bits and pieces of the latest adventures and monsters undertaken by the Doctor, (Peter Capaldi) Nardole (Matt Lucas), and the Doctor’s newest companion, Bill (Pearl Mackie).

The new season, which will be Capaldi’s last as the Doctor and Steven Moffat’s final season on board as showrunner, introduces Whovians to Bill Potts, who is stepping in following the departure of Jenna Coleman‘s Clara at the end of Season 9. Nardole’s only previous appearances on the series were in the show’s Christmas specials.

In the trailer, the group is shown coming face-to-face with an emoji-monster, exploring Mars, and taking a walk back in time to the days of 1814. The trailer jumps around from submarines to space stations to cities of the future, and gives a glimpse of the many creatures the group will face, including what appears to be an enormous sea monster as well as a classic Mondasion cyberman.

As for what to expect throughout the season, perhaps the Doctor sums it up best at this point in time: “Something’s coming Bill, and I have the feeling we’re going to be fairly busy.”