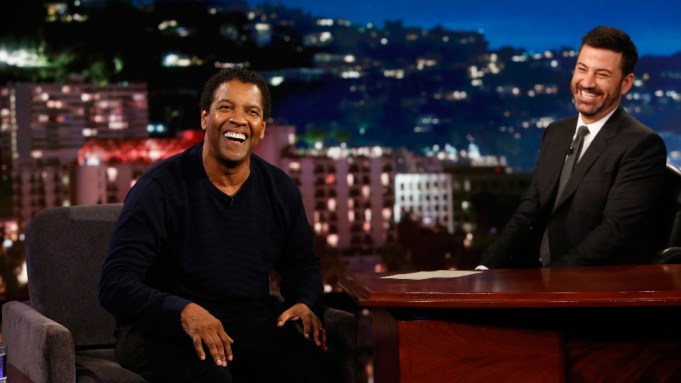 Denzel Washington may have seen every film he’s ever appeared in, but the question is, can the actor remember his most famous lines from those movies?

During Tuesday’s appearance on “Jimmy Kimmel Live!,” Kimmel put Washington through his paces, asking him to distinguish lines that he had said in movies from quotes that he hadn’t uttered.

Things got off to a poor start for the “Fences” director and star.

“For out of the ground we were taken for the dust we are, and to the dust we shall return,” was the first line read aloud by a volunteer at a local Los Angeles farmers’ market.

“Nah, I never said that,” Washington replied with conviction, before throwing his hands up in disbelief when it was revealed he uttered the line in the 2010 drama “The Book of Eli.”

“I was so sure, too! That’s because I’m in character and I don’t remember everything,” the actor reasoned.

However, from that embarrassing moment on, Washington went a flawless seven-for-seven on identifying the lines, including one from his first-ever movie, 1981’s “Carbon Copy.”

Perhaps unsurprisingly, the quote which Washington recalled with the most ease was the line, “Before there was any such thing as a Republican or a Democrat, we were black,” from “Malcolm X.” But the soundbite that provided the most hilarity in the segment was “King Kong ain’t got s— on me,” from “Training Day,” mostly because of the strange way in which the volunteer farmers’ market customer seemed to phrase it.

Both Washington and Kimmel will return to ABC later this month for the Academy Awards, with the latter hosting and the former considered one of the frontrunners for best actor.