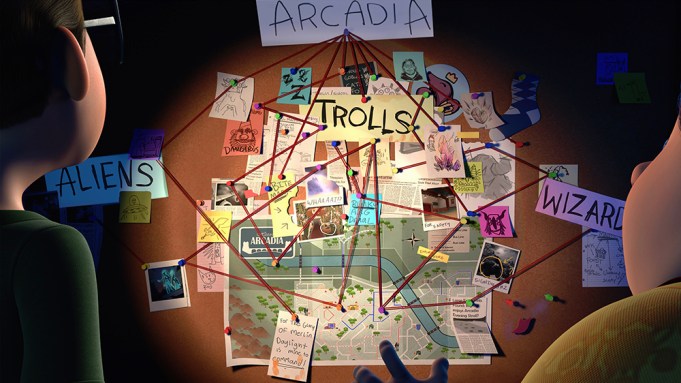 The trilogy, branded together as “Tales of Arcadia,” was announced by del Toro on Monday following a screening of the first two episodes of “DreamWorks Trollhunters Part 2,” set to debut on Netflix on Dec. 15, and a Q&A with del Toro and actor Mark Hamill, who joined the new season of “Trollhunters” as the villainous brother of the Blinky, one of main Trollhunter’s mentors.

“The idea was to create three interconnecting series that shared a mythology,” del Toro explained before introducing a clip that sets up the trilogy.

“DreamWorks 3 Below” will bow on Netflix next year and will follow a pair of teenage royals and their bodyguard hiding on Earth after a surprise coup drives them from their home planet. They’re forced to try and blend into the strange new world while trying to repair their damaged ship so they can return and fight for their home planet.

“DreamWorks Wizards,” which will debut in 2019, will bring together all three stories, culminating in an epic battle.

There have been hints about the new series peppered throughout “DreamWorks Trollhunters” already, according to del Toro. “Already, in the early season of ‘Trollhunters,’ we’ve introduced characters you don’t know how important they are in the other two series. We’ve secretly been planning this for years,” he said.

The idea of all these amazing things happening in a small town has its roots in del Toro’s own childhood.

“When I was growing up in a small city in Mexico for some reason I thought everything was going to happen there. When I was in 7th grade, we went into the sewers with flashlights — I don’t recommend it — and we actually crossed the city from beneath. That’s where ‘Trollhunters’ comes from,” he said. “And for whatever reason, at age 15, I saw a UFO,” he said, interjecting, “I have a strange life.”

Those events stuck with del Toro through the development of the trilogy. “I thought what if we do a really complex mythology that criss-crosses in a tiny, little California town, as opposed to happening in London, New York, or L.A. A place called Arcadia. Each of those parts illuminate a different mythological aspect of the town. And you get to meet characters from each of these three series.”