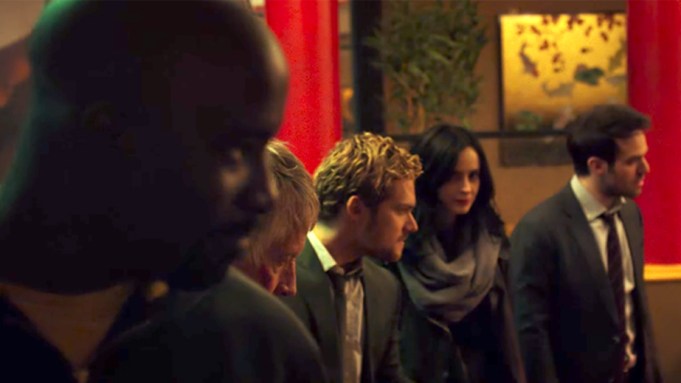 Marvel and Netflix presented a surprise premiere of episode one of “The Defenders” Friday at Comic-Con in San Diego.

Thirty minutes into what was a panel for the show, Marvel head of television Jeph Loeb announced that the full episode would be screened. Loeb and the show’s executive producers and cast then exited the stage, and the episode began screening.

They also unveiled a new trailer for the show, which premieres globally on Netflix Aug. 18. The series brings together characters from Netflix’s four preceding Marvel superhero shows — “Daredevil,” “Jessica Jones,” “Luke Cage,” and “Iron Fist” — for the first time in order to save New York City.

Loeb also on Friday presented first look footage of upcoming series “The Punisher.” The executive also announced that Netflix has renewed another of Marvel’s series, “Iron Fist,” for a second season.

“The Defenders” is executive produced by Marco Ramirez and Doug Petrie along with Marvel TV head Jeph Loeb. The series is produced by Marvel Television in association with ABC Studios for Netflix.